Villanueva questions filing of pork charges ahead of 2016 elections 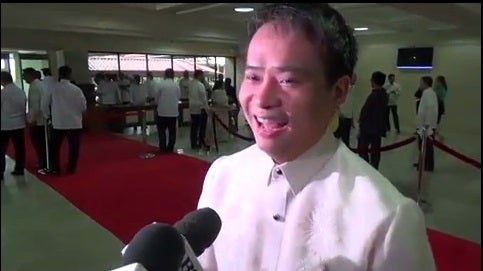 Tesda Secretary Joel Villanueva finds it “weird” that he is being sued for malversation “after being asked to help the government.”

Cabinet member Joel Villanueva finds the timing “weird” that he is being sued for malversation over the pork barrel scam ahead of the filing of candidacies for the 2016 elections.

The Technical Education Skills and Development Authority (Tesda) secretary went to the Office of the Ombudsman on Friday hours before the National Bureau of Investigation (NBI) filed the malversation, graft and direct bribery complaint against him and eight other former and incumbent lawmakers over the pork barrel scam.

In an interview, Villanueva said his political rivals were behind the charges in an effort to derail his political ambitions come 2016.

“More than 700 days na po ito, if it’s gonna come to this then so be it. Ako ay narito for an official mission at hindi ako natatakot sa katotohanan,” Villanueva said.

He said it was “weird” that he was being sued months before he was expected to file his candidacy for senator in the 2016 elections.

He also found it weird that he arrived at the Ombudsman to serve as a witness in a case against his predecessor former Tesda chief Augusto Syjuco and yet he would be sued for malversation.

“I find it weird because I’m here to cooperate and being asked to help government,” he said.

Villanueva said he was surprised he was included in the complaint when the NBI in its report cleared him of the charges.

He said the NBI noted that some letters used his signature even though it was used for a different party-list. He also said his name was used to forge signatures.

Villanueva is part of the third batch of pork barrel scam raps. He is accused of receiving P2.33 million kickbacks from accused mastermind Janet Lim-Napoles when he was a representative for the Citizens Battle Against Corruption (Cibac) party-list.