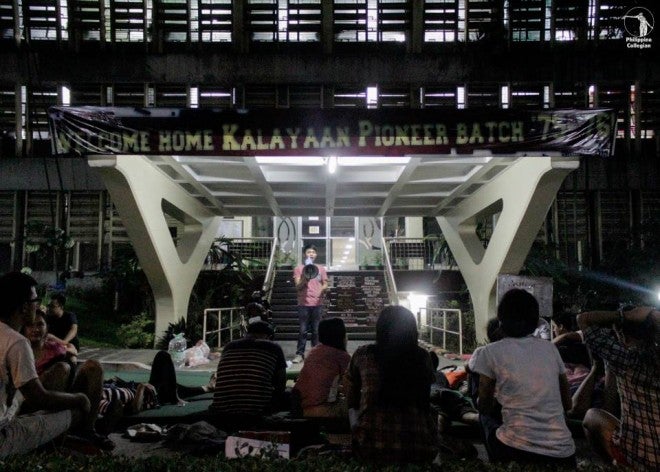 Dozens of students camped out at the University of the Philippines (UP) – Diliman on Thursday evening as they await the results of their appeal for affordable dormitories.

Mench Tilendo, chairperson of the Student Alliance for the Advancement of Democratic Rights in UP, said the students have been camping out also in protest of the lack of transparency in the process and the commercialization of education.

“It is not the first time that there has been a shortage in dorm slots,” Tilendo said in Filipino. However, she told INQUIRER.net that more students were displaced this year because the university also accommodated more freshmen.

A report posted by the National Union of Students of the Philippines (NUSP) said the UP administration “took in more students, more than what it could actually accommodate, to compensate for the lack of enrollees next academic year due to the K to 12 program.”

The Congress of Teachers and Educators for Nationalism and Democracy (CONTEND), on the other hand, held a press conference on Friday morning to discuss the problem of dorms and “underloading” or the inability of students to register for enough units.

“Data from the UP Diliman administration show that there are 3,563 enrolled first-year students for the first semester of this academic year, compared to 2,723 during the same period in the previous academic year,” said a joint statement posted online by UP professor Danilo Arao.

“This translates to an increase of 840 students, hence the problems encountered during registration and dorm accommodation. Sources in the UPD administration claim that the acceptance of more students this year is due to the expected reduction of the number of enrollees in 2016 and 2017 as a result of the K-12 program,” it added.

On Thursday, UP Diliman Chancellor Michael Tan held a dialogue with the students.

Tilendo said 320 appeals were granted but some students remained dorm-less.

She explained that most UP students hope to qualify in Kalayaan and other state-funded dorms because staying there costs only P350 to P600 per month. Semi-private and private dormitories, on the other hand, charge P1,500 to P3,000 a month, excluding the costs of water and electricity.

Tilendo said many of the students awaiting the results of their appeal camped out in front of Kalayaan or slept in offices inside the campus. Some stayed at the Sunken Garden.

The All UP Academic Employees Union reportedly allowed several students to sleep in its office while Tan said the Church of the Risen Lord, also inside the campus, will accommodate a maximum of 10 students Friday night.

Tilendo said they are demanding transparency in the appeals process, especially since the Dormitory Oversight Admissions Committee (DOAC) does not have a student representative.

She said many students complained that they submitted all the requirements, including proof of their low income, but were still rejected.

For now, they are thankful that many individuals have offered help. One good Samaritan provided meals for 300 students on Friday. Others gave monetary donations.

Tilendo said they will wait for further announcements from the DOAC on Friday afternoon. They expect the results of the next batch of appeals to be announced. KS

TAGS: dormitory, University of the Philippines, UP Diliman