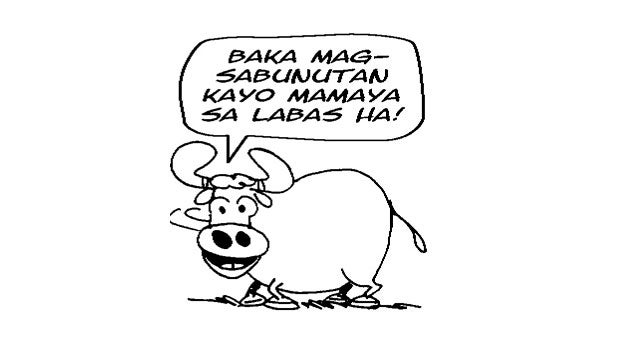 From the sublime to the ridiculous; from straight talk to swardspeak.

Or so observers might say of the tit for tat between the spokesmen of the two highest officials of the land, who have both resorted to gayspeak in their exchange about President Aquino’s State of the Nation Address (Sona) and Vice President Jejomar Binay’s counter “true” State of the Nation (Tsona) speech.

“Binay has been hitting everyone like a shotgun,” Lacierda explained.

It was a cringe-worthy exchange that Lacierda met with amusement.

“Ha, ha! I love it that Vice President Binay is marching to the beat of our drums!” he said in a text message to reporters.

Salgado said he did not know “beki speak” or gay lingo, “but consulted those who do and came up with that response.”

The Binay spokesman added: “By now we know that the good secretary would rather dwell on the trivial than on the substantive.”

Extending the word war to comments on Lacierda’s health, Salgado said: “The mere mention of Vice President Binay’s name apparently makes his blood rise. His anger gets the better of him. Chill, sir.”

In another press briefing, Lacierda responded that he drank “Coke Zero,” not coffee.

To which Salgado said: “I stand corrected about your favorite drink, sir. But I won’t blame the previous administration,” he added in apparent sarcasm. President Aquino’s last Sona had been criticized for again faulting former President Gloria Macapagal-Arroyo for several of his administration’s failings.

As if that were not enough, Binay’s spokesman told Lacierda: “Take care with your favorite drink. There are studies in the US that say aspartame and artificial sweeteners can cause high blood and cancer.

Communications Secretary Herminio Coloma Jr., who said he did not understand nor speak gay lingo, dismissed the exchange and said that the Palace focused on “issues, reform and good governance.”

“Our group follows the principles of honest and rational communication. The focus of our statements is platforms and issues. Our bases are the straight path and good governance,” Coloma said in a Palace briefing on Thursday.