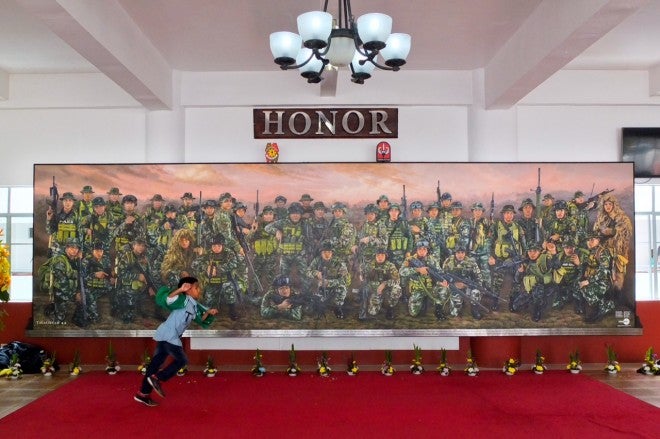 The P4million mural, in honor of the 44 fallen police officers, was removed from a police instution and was transfered to the VP’s residence. CLIFF NUÑEZ

In a statement Thursday, the Office of the Vice President (OVP) announced that the seven by 26-foot long mural, called the “Tagaligtas 44,” “found a new home” at the Coconut Palace.

“The mural is now at the ground floor…so that all visitors can see the artwork, which was created by a group of artists to remind Filipinos of the SAF (Special Action Force) 44’s sacrifice and heroism,” the statement read.

The mural was created for 26 days by 10 artists from the Erehwon Center for the Arts Foundation Inc., which remains to be the owner of the art piece.

Aside from the mural, the art group also erected at the PNPA an 18-foot tall SAF 44 monument, funded by the Philippine Chamber of Commerce and Industry (PCCI).

The mural depicted portraits of the 44 SAF commandos slain in an anti-terrorist mission to Mamasapano, Maguindanao on January 25. It was originally installed at the open lobby of the PNPA and was unveiled by Binay during the PNPA Alumni Homecoming on March 14.

The monument was unveiled on April 9 with President Benigno Aquino III as the supposed guest. “But the president called it off a day before (the event) for reasons only they knew,” said Erehwon chairman Rafael Benitez, in a separate phone interview Thursday.

The OVP statement, quoting an unnamed source, said the mural was later ordered taken down by Aquino “allegedly because too many visitors were takings photos or “selfies” with the mural as backdrop.”

Instead of putting it away in a ‘bodega’ (warehouse), the PNPA informed Erehwon of “the President’s order,” which prompted the Quezon City-based art group to recall the mural sometime in April, the OVP added.

An Inquirer source, knowledgeable about the mural’s installation, confirmed that an order came from President Aquino, although it was only to “have (the mural) covered.”

“(Erehwon) was supposed to pull it out just for cleaning because of the bird droppings. But later, it decided that it be transferred to the Coconut Palace,” the source said in a separate interview.

Chief Superintendent Armando Ramolete, the PNPA director, denied this, saying it was Erehwon’s decision to pull out the mural.
Asked if it was President Aquino who ordered it removed, he replied, “hindi naman (not really).”

Benitez confirmed there was an order to the PNPA to have the mural covered, but said he would “rather be silent about” who gave the order.

He said the mural was already back in their office in Quezon City when a request came from Binay, made through Jess Varela of the PCCI, to use the artwork during the Vice President’s TSONA in Indang, Cavite last Monday.

During his speech, Binay paid tribute to the SAF 44, while hitting Aquino for failing to mention the slain troopers during the President’s Sona.

Binay, again through Valera, requested that the mural be placed at the Coconut Palace, to which Erehwon agreed.

“It doesn’t mean we are endorsing (Binay). (Coconut Palace) is the official residence of the Vice President, regardless who the VP is,” Benitez said.