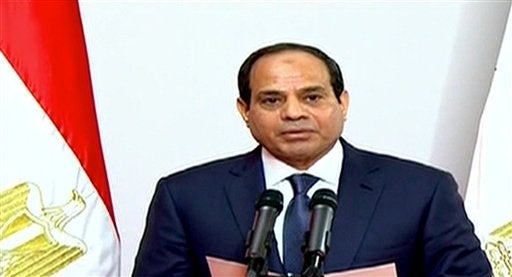 CAIRO, Egypt – President Abdel Fattah al-Sisi on Thursday inaugurates a “new” Suez Canal in a historic moment of national pride, as Egypt seeks to boost its economy and international standing.

The event in the port city of Ismailiya, due to be attended by several heads of state including French President Francois Hollande, comes two years after then army chief Sisi overthrew his Islamist predecessor.

Sisi broke ground on the project last August after being elected president on promises of strengthening security and reviving a dilapidated economy.

Initial time frame estimates put construction of the new route at up to three years, but Sisi set an ambitious target of just one year.

Meeting that is being touted as a landmark achievement, rivalling the digging of the original 192-kilometre (119-mile) canal which opened in 1869 after almost a decade of work.

The new section, built at a cost of $9 billion (7.9 billion euros) and funded entirely by Egyptian investors, runs part of the way alongside the existing canal connecting the Red Sea and the Mediterranean.

“It’s an achievement for the people who managed to fund it as a national project and accomplished it through perseverance and hard work,” Sisi’s office has said.

It involved 37 kilometres of dry digging, creating what is effectively a “second lane”, and widening and deepening another 35 kilometres of the existing canal.

It will cut the waiting period for vessels from 18 hours to 11.

Sisi will open the ceremony by joining a naval parade, with some 10,000 policemen standing guard across six provinces, state media said.

Newly-acquired French Rafale warplanes and US F-16s delivered last week will also be on display.

Banners saying “New Suez Canal: Egypt’s Gift to the World” and hundreds of Egyptian flags grace the streets of Cairo and other cities.

The waterway is a cornerstone for Sisi to boost his regime’s legitimacy after a deadly crackdown killed hundreds and jailed thousands of supporters of ousted president Mohamed Morsi, including women.

In revenge, militants have killed hundreds of policemen and soldiers, mostly in the Sinai Peninsula that lies between Israel, the Gaza Strip and the Suez Canal.

On Wednesday, the Islamic State group’s Egyptian affiliate posted a video online threatening to execute within 48 hours a Croatian man it kidnapped last month if Muslim women jailed in the country were not released.

Amr Adly, of the Carnegie Middle East Center, said that “since Morsi’s ouster, the new regime is engaged in a political conflict to prove its legitimacy inside and outside Egypt.

“The ability to accomplish such an economic project is part of cementing this legitimacy.”

The waterway is part of a comprehensive project to develop the area adjacent to the canal into an industrial hub.

“There is a stream of investors who want to invest, because the level of trust in Egypt and its political leadership is very high,” Suez Canal Authority chief Mahob Mameesh said last week.

He said about one million jobs are expected to be created over the next 15 years.

Fawaz Gerges, of the London School of Economics and Political Science, called it “a magnificent project” but added that it “does not resolve the structural challenge facing the economy”.