Man with pellet gun shoots it out with cops, killed | Inquirer News

Man with pellet gun shoots it out with cops, killed 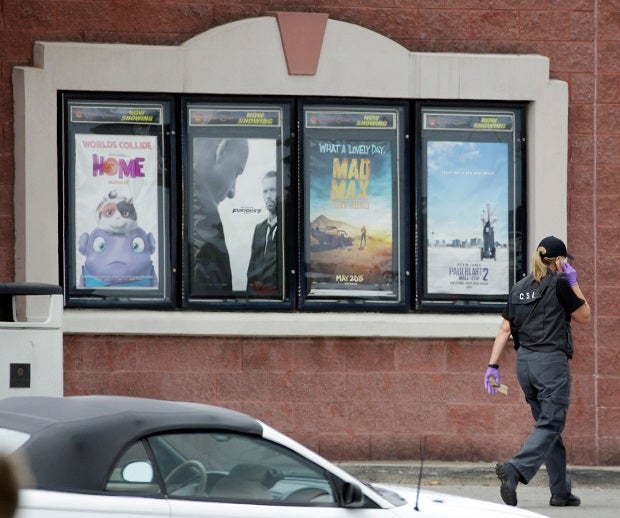 A police officer walks by a display of movie posters, including one for “Mad Max,” outside a movie theater following a shooting Wednesday, August 5, 2015, in Antioch, Tennessee. A man armed with a pellet gun and a hatchet unleashed a volley of pepper spray at audience members inside a movie theater, exchanging fire with a responding officer before being shot dead by a SWAT team as he tried to escape through the theater’s rear door, police said. AP

ANTIOCH, Tennessee, United States — A man armed with a hatchet and a pellet gun unleashed a volley of pepper spray at audience members inside a movie theater Wednesday before being fired at by a police officer and shot dead by a SWAT team as he tried to escape out a back door, police said.

The attacker, identified as a 29-year-old white local man, was carrying two backpacks, one of which hung from his chest, and he wore a surgical mask, possibly to protect himself from the pepper spray he unleashed in large amounts during the showing of “Mad Max: Fury Road,” Metro Nashville Police spokesman Don Aaron said. He said three people were blasted with the spray and treated. There were eight people in the theater, including the assailant, Aaron said.

As he fled out the back, the attacker encountered a SWAT team and was shot dead, Aaron said. About two dozen gunshots could be heard in a 10-second period in raw video footage posted online by WKRN TV. Police initially said that the assailant had been armed with a gun and that he exchanged fire with the first responding officer, but Aaron said later Wednesday that the man had been armed with a pellet gun.

The violence at the Carmike Hickory 8 complex comes about two weeks after a 59-year-old drifter opened fire inside a movie theater in Lafayette, Louisiana, fatally shooting two before killing himself. It also happened while jurors in Colorado decide whether the man who killed 12 and injured 70 others during a theater shooting in 2012 should receive the death penalty.

One of the people hit with the pepper spray in the theater also had a cut that evidently was caused by a hatchet, Aaron said. Aaron identified the victim only as Steven because he said the man did not want to bring any more attention to his family.

“The only thing that I would like to say is that I’m eternally grateful to the Metro Police Department for their fast response today, and the fact that no one else got injured other than the person who did this,” Steven said.

“And I would also like to thank all the citizens who gathered around us, helped my daughter when we were pepper sprayed. That kind of gives me a little bit more faith in humanity again.”

Steven added that he had “no idea why this gentleman decided to attack us.”

One of the attacker’s two backpacks was detonated and then found to contain a fake bomb, Aaron said. He said investigators were going through a second backpack that the assailant left at the theater. No one was taken to a hospital.

The only person shot was the assailant, whose motive was still unclear, Aaron said. His name was not immediately released. Police initially described him as a 51-year-old white local man, but Anderson later said authorities believe he was 29. Anderson said the man had an ID on him but police want to confirm his identity through fingerprints and other means.

The entire event transpired over less than an hour’s time. Aaron said the first call came in about 1:13 p.m., and that two officers outside in the midst of a traffic stop responded within two minutes just as witnesses ran toward them. An officer came into the theater and was fired upon by the attacker, Aaron said. The officer shot back, then backed off but, Aaron said, the officer kept the gunman confined to a single theater in the complex.

Mattie Sanchez works at the Sprint store near the theater. She told The Associated Press by phone that a man who had two backpacks and fit the description of the attacker tried to enter a backdoor of the store about 11 a.m.

She said the man, who had dark hair and was wearing a yellow shirt, also walked in front of the store. Sanchez said she later heard what sounded like “rapid fire” and saw the large police presence.

The theater complex sits in a commercial area in Antioch, a middle-class community in the southern part of Nashville. It’s next to the Global Crossing mall, a past-its-prime shopping area recently upgraded with an ice rink developed by the Nashville Predators professional hockey team.

The latest shooting comes about two weeks after John Russell Houser killed two people and wounded nine others before fatally shooting himself during a screening of the movie “Trainwreck” at a theater in Lafayette, Louisiana.