Roxas presses courtship of Poe as his VP 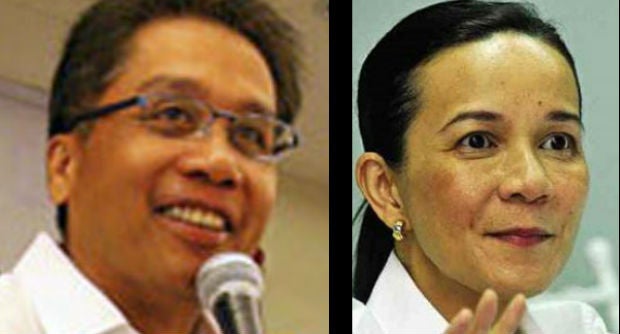 The administration coalition’s possible one-two punch in next year’s polls are textmates nowadays.

Interior Secretary Mar Roxas on Wednesday said he would directly speak with Sen. Grace Poe to woo her to be his running mate in the 2016 presidential election under the coalition led by the Liberal Party (LP).

Speaking with reporters after addressing the Angkla party-list group in Navotas City, Roxas said he had yet to set a date with Poe to discuss the possibility they could team up, as President Aquino wanted.

He said he texted Poe to inform her that he had an interview on a morning TV show Wednesday where he was asked about the LP’s attempt to persuade her to join the administration ticket.

“I just gave her a heads up,” Roxas said. “I told her I was interviewed and that at least she would not hear it like a rumor or a false story.”

“She replied that her comment was connected with several questions, which were asked (in her interview with the media). So it’s OK,” he said.

Poe told reporters that she had been informed about Roxas’ TV interview.

“I am thanking him for his continued invitation but please understand—and I have said this several times now that this is a long process of consideration. We still have until October and I don’t want to put them in an uncertain position because I am still deciding. It is for them to continue to wait and I am thankful for opening their door to me,” she said.

Poe said she was open to meeting with Roxas whom she considers a “friend.”

“I am always willing to meet with them. For whatever point of view I have on the situation, I am grateful that they respect my views on this,” she said.

In the interview with reporters, Roxas distanced himself and the LP from those who filed a case in the Senate Electoral Tribunal questioning Poe’s citizenship.

“We have nothing to do with that,” he said.

Roxas, who was handpicked by the President to succeed him, maintained that he himself had invited Poe to be his running mate, contrary to what Poe told reporters on Tuesday that she had not been asked directly to run as Roxas’ Vice President.

“I have invited her. Our party is open (to her). We are inviting Sen. Grace Poe to form the tandem and join our movement in pursuing and expanding the ‘straight path’ (advocacy),” Roxas said.

Asked how Poe responded, he said: “At the time, it was a few months ago, she said she was still thinking about it.”

He said the President had also told Poe about the possibility of her seeking the second-highest elective post alongside Roxas during their meeting.

“Maybe she thought there was no formal invitation for her after I was endorsed (by the President). Maybe after this I would remind her,” Roxas said.

When asked whom among Poe, Batangas Gov. Vilma Santos and Camarines Sur Rep. Leni Robredo he would personally choose as his running mate, he said all of the three women possessed the good qualities of a leader.

“They all have their own experiences and skills. They have shown their concern for the people,” he said. “But what’s more important is that their belief in the straight path should be ‘to the bones.’”

In the interview with reporters, Poe said she was preparing a platform of government and she could not reveal her political plans until after its completion.

“I have to look at every point there to see how I could accomplish these promises,” Poe said. Until then, she said, she was praying and preparing.

Members of the business community, academe and other sectors were giving her their opinions and help.

She said Aquino had been helping her understand the problems of the presidency. She said that whenever they had a chance to talk, the President would give her “background” and “case studies.”

Poe said this when asked about news reports that the President had shown her a document during his last State of the Nation Address last week purportedly threatening her citizenship.

“The President is not that kind of person,” she said, adding that Aquino had actually shown her a “Top Secret” document that had nothing to do with her possible run for the presidency or background but on “national issues.”

She said she did not know why the President showed her the document, but added that he did tell her earlier on he would help her understand the problems that he had to deal with.

Poe also said she was preparing for questions on her citizenship.

Poe says no invitation from LP to run as Roxas’ VP