Kid Peña has his Makati cake–and bidding out P9-M contract, too 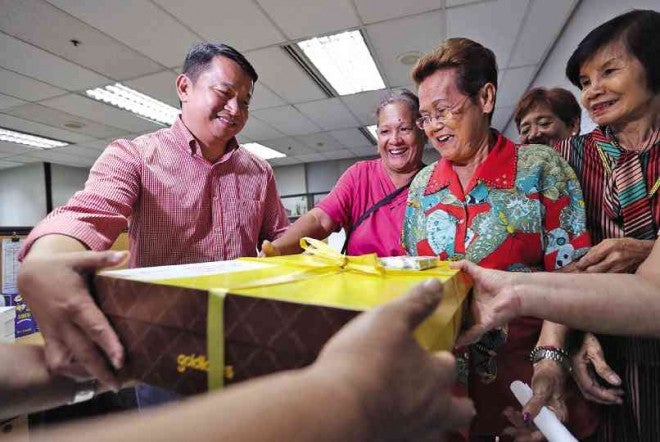 He may be years away from becoming a senior citizen, but on his 46th birthday on Wednesday acting Makati Mayor Romulo “Kid” Peña Jr. received a cake from the city’s Office for Seniors Citizens Affairs (Osca).

According to Osca, the cake “was a gesture of gratitude for [Peña’s] good and transparent governance that has brought about significant improvements in the benefits and services for the elderly residents of Makati.”

Touched by the gesture, Peña said the city’s seniors could now enjoy “personalized medical care” with house visits from Makati Health Department doctors and free delivery of medicine and vitamins straight to their houses.

“I am glad to report that within our first month of transparent governance, the city government has already made progress in improving public service to our constituents,” he added in a statement.

Peña also announced that the bidding for the cake-giving program worth over P9.3 million would be held on Aug. 10.

About 300 cake makers, including Goldilocks and Red Ribbon, are expected to participate.

Earlier, Peña said he would continue the city government’s program of giving cakes to the elderly on their birthday, although he promised that the giveaways would be “more affordable, tastier and branded.”

The cake-giving program started in 2003 when Vice President Jejomar Binay was still Makati mayor. It generated controversy last year after lawyer Renato Bondal alleged in a Senate hearing that the baked goods were overpriced.

The spokesperson of Mayor Junjun Binay—who is serving out a six-month suspension on allegations of overpricing—has questioned Peña’s earlier statement that he would be paying for the cakes himself pending the holding of the bidding.

“If that is [taken] out of his pocket, can his statements of assets and liabilities justify his generosity? If [the money is] from third parties, who are they? Are they Makati businessmen because if they are, that’s a clear conflict because the city government regulates businesses. At the least, [that is a] violation of [the] code of ethical standards,” Salgado added.

In response, Gilbert de los Reyes of the city’s Public Information Office clarified that Peña paid only for the initial 30 cakes that were distributed, not 300 as earlier reported.

“Now, since there is still no supplier, the cakes are sponsored by his friends who have no business in Makati,” he said.

But Salgado insisted that Peña should disclose the names of his sponsors and present other proof if they were really aiming for “transparency.”

“General statements won’t do. Peña has also gone on record as saying that a popular bakeshop will bid for the project. He even mentioned the amount they will bid which is clearly influencing the bidding process,” he said.