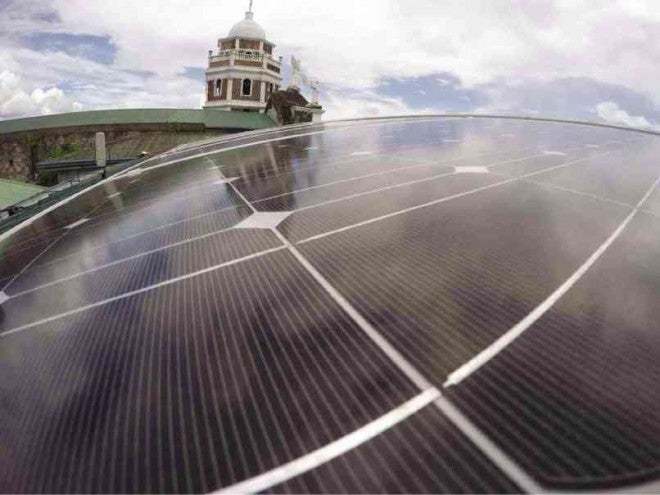 SOLAR panels have been installed on the roof of the Our Lady of the Angels Parish church in Atimonan, Quezon province. PHOTOS BY ALBERT LOZADA/GREENPEACE-PHILIPPINES

THIS CATHOLIC parish priest walks the talk. Msgr. Emmanuel Villareal, who has been very critical of a proposed coal-fired plant in the coastal town of Atimonan in Quezon province, has turned to green energy, laying solar panels on the roof of the Our Lady of the Angels Parish Church.

Meralco PowerGen plans to put up a 1,200-megawatt (MW) coal-fired power plant on an 80-hectare property in Barangay Villa Ibaba, Atimonan, 73 kilometers south of Manila. Originally, it intended to pursue a liquefied natural gas (LNG) combined cycle power plant, but converted the project to coal plant in the absence of government policy support for the LNG industry.

“We’re not only opposing the plant, we’re also offering a safe alternative for our community members to emulate and free them from being dependent on fossil fuel,” Villareal said in a phone interview.

The Diocese of Lucena led by Bishop Emilio Marquez is leading the campaign against the proposed power project. In June, more than 1,500 people led by church leaders, staged a procession around Atimonan, criticizing coal-fired power plants for speeding up global warming.

Quezon province already hosts two coal-fired plants—the 735-MW plant in Pagbilao town facing Tayabas Bay, whose generating capacity is being extended by an additional 420 MW with another plant, and the 1,500-MW plant in Mauban town, which is also facing the Pacific Ocean.

Atimonan municipal officials have already approved the coal-fired plant project, saying it would create 1,000 to 2,000 jobs for local construction workers aside from a tax windfall expected from plant operations.

Mayor Jose Mendoza has claimed that except the Church, his town mates fully supported the project. The provincial governments and other municipalities have also approved it, he said.

However, the Department of Environment and Natural Resources was still processing the permit for the project, Mendoza had said in an earlier interview. “The construction phase has yet to start,” he said.

Villareal refuted the mayor’s claim of widespread support. “The church has been serving as front and voices of the silent majority in the community against the plant project,” the priest said. 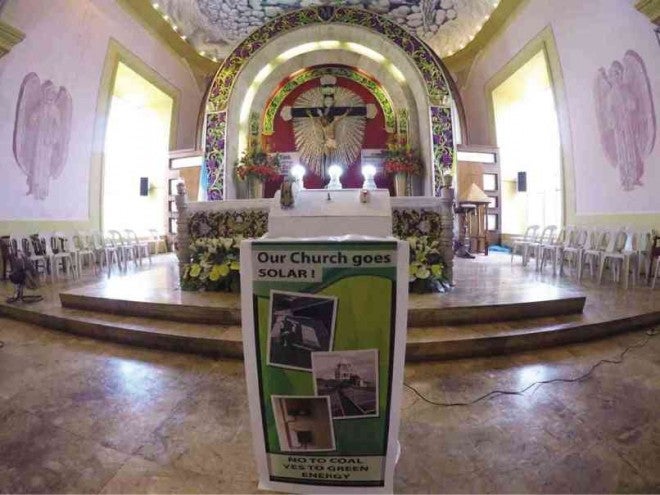 The anticoal message is displayed inside the church.

A 5-kilowatt (KW) grid-tied-solar system was installed on the roof of the heritage church as part of a campaign against the coal-fired facility. Villareal said the renewable energy project was also the local church’s concrete response to the call of Pope Francis to care for the environment in his recent ecology encyclical, “Laudato Si” (Praise Be).

“By making a small step towards becoming a green church, we are providing our people a strong message that switching to renewable [energy] was possible and we, starting with our communities, can do it now,” he said.

Turning green is a big stride for the Our Lady of the Angels Parish Church, which is made of stones and steeped in history.

The first church was burned down by Dutch invaders in 1640, according to the historical marker installed by the National Historical Commission. The second was built in 1643, but it was damaged by a fire in 1648.

The present church and convent was built between 1687 and 1700, but both were seriously damaged by an earthquake in 1937. Rebuilt and refurnished over the years, it now has a totally modern look on its roof area adjoining the bell tower, where a series of solar panels have been lined up.

The solar-powered system was installed in five days and switched on on Aug. 2 capping the celebration of the town fiesta in honor of Our Lady of the Angels, the patroness of the parish. It cost more than P620,000 derived from church savings and donations from parishioners.

It is expected to supply almost half of the daytime electricity needs of the church, translating to P10,000 to P15,000 savings from its average monthly bill of P30,000.

“Our parishioners were all surprised and joyous on our switch to solar power. Most local residents and even some businessmen have also shown genuine interest to follow our initiative,” Villareal said.

According to him, some Catholic churches in other parts of the country have also installed solar power systems. “The Atimonan church was only amplified in the news due to our opposition to the proposed coal-fired plant in our midst,” he added.

In his homily, Marquez of the Diocese of Lucena, who presided the switch-on ceremony, called on the faithful to remain vigilant in protecting the environment against the proposed coal-fired plant.

Jenny Tuazon, Greenpeace-Southeast Asia media campaigner who was among those who attended the event, commended the parish church for going solar to address their electricity needs.

“People all over the world recognize that adaptation is one of the ways we can do to take action and challenge the power of the fossil fuel industry,” Tuazon said in a blog that appeared in the Greenpeace website on Aug. 2.

In the Philippines, every action counts—both big and small—in the battle against pollution brought by fossil fuel, she said. “It’s about time to phase out coal, heal the planet and transition to clean energy and clean air for all.”

Tuazon called on more churches and communities to follow the initiatives of the Atimonan Church. “We are more powerful when we act together,” she said.