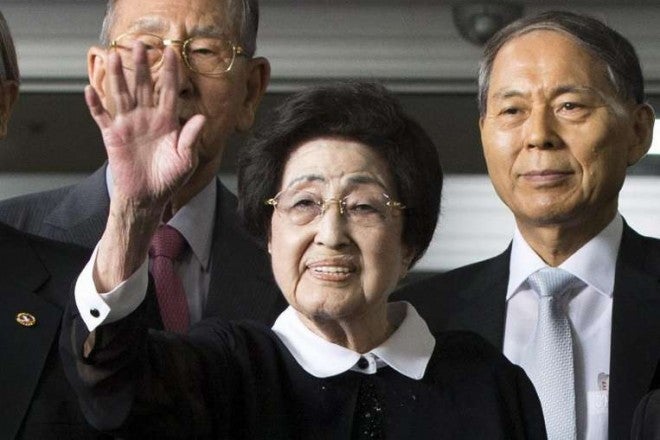 The visit from August 5 to August 8 by Lee Hee Ho is ostensibly humanitarian in nature but there has been much speculation about a possible meeting with North Korean leader Kim Jong Un, who personally approved the trip.

“I hope that this trip will offer a window for more dialogue, exchange and cooperation,” Lee was quoted as saying by her spokesman at a Seoul airport.

“I am going to Pyongyang with hopes that Koreans can … heal the wounds and pain of the past 70 years of division,” she said.

The two Koreas technically remain at war and direct flights between the two countries – such as the one taken by Lee and her 18-member entourage – are extremely rare.

Lee has visited the North three times, the last trip being to pay respects during the funeral of Kim’s father, the late leader Kim Jong Il, in December 2011.

At the time, she briefly met Kim while he was receiving mourners.

Lee’s husband is best remembered for his “sunshine” policy of engagement with the isolated but nuclear-armed North Korea that led to a historic summit with Kim Jong Il in 2000.

The policy was however largely abandoned when a conservative administration took power in 2008 and cross-border ties soured.

A series of nuclear and missile launches by the North in recent years as well as occasional military clashes have kept tensions on a high simmer.

Seoul has stressed that Lee’s visit is a personal one and she is not carrying any official message from the South Korean government.

But some analysts say her trip and its sanctioning by Kim may offer a window for resuming a dialogue in relatively non-political issues.

Almost all talks over major issues from Pyongyang’s nuclear arsenal to the resumption of official South Korean aid for the North have been shelved for years.

The visit comes just ahead of the 70th anniversary of the Aug 15, 1945 liberation of the pre-division Korean peninsula from Japanese colonial rule.

At the start of the year, there had been hopes that the anniversary could serve as an icebreaker for a resumption of dialogue, but the two sides have been unable to agree on any joint celebratory event.