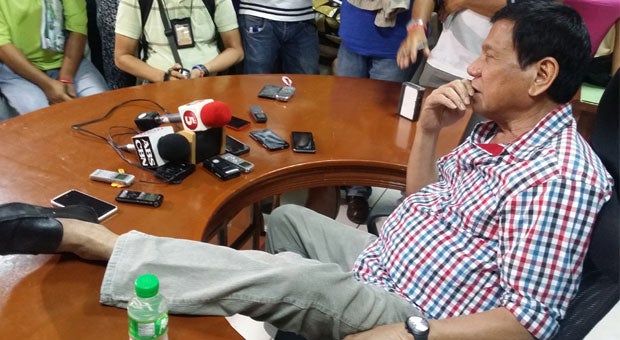 MLANG, North Cotabato—If he had his way, Davao City Mayor Rodrigo Duterte would like government officials and workers to step into his shoes. Literally.

“I wear cheap shoes,” he said, displaying his left foot on the table to show off his nonbranded footwear. “I don’t even wear socks,” said the mayor, who used his sartorial style to stress that simple living was the key to eliminating corruption in government.

Duterte, who claimed he had never been involved in any corruption scandal in his 22 years in government as prosecutor, mayor, congressman and vice mayor, said he could easily have yielded to temptation given the many opportunities that local officials have to make dirty money.

“Fifteen percent here, 15 percent there, easy money,” he said apparently referring to the commission being offered by contractors to government officials.

If he had been corrupt, he could have easily lived in big houses in posh subdivisions, Duterte said. But because he turned away every opportunity to make dirty money, he has only one house, he added in a speech delivered during the 64th anniversary of this town.

“My father was governor of Davao (when it was still one province). I became mayor in 1988 because of his name. I would never destroy that,” the Davao official said.

As mayor, Duterte said he earns more than enough to support a simple lifestyle. “Salary plus allowances as mayor should be enough,” he added.

If he ever becomes the country’s president, he would never be jailed for pocketing government money, the mayor said.

“Perhaps [for] genocide and murder,” he added, generating laughter from the crowd.

Citing his intelligence fund, Duterte said he always makes sure that government money was spent for public good.

“I give all the precinct commanders (my) support [and intelligence fund] every month for operation. Our policemen also get rice subsidy,” he added.

In return, Duterte said he gets the results he wanted: a police force that is less corrupt and a peace and order problem that is easily addressed.

Paying government employees and officials well is one way of preventing corruption, he said, adding that policemen should get P50,000 in basic pay and P20,000 in monthly allowance to enable them to give their families a better life.

The reality these days, Duterte said, is that a policeman’s take-home pay is just about P3,000 per month after paying off loans they incurred to support their children’s education.

But policemen in Davao City don’t go around asking for bribes because they get full support from the city government, Duterte said.

“If they do, they will lose their heads,” he added.–Allan Nawal

PH in good hands with Poe or Duterte as president