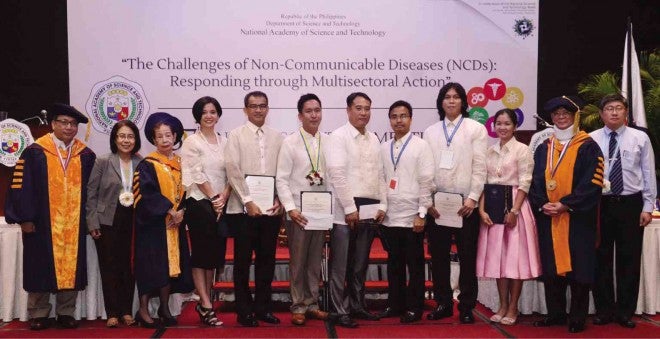 Seven Outstanding Young Scientists for 2015 were named recently by the National Academy of Science and Technology (NAST), the country’s highest scientific advisory body.

The announcement of the new young scientists highlighted the 10th annual meeting of the Outstanding Young Scientists, a collegial body of
recipients of the award given annually by NAST.

This year’s outstanding young scientists are all from the University of the Philippines (UP) system, except for one.

Aimee Lynn Barrion-Dupo of UP Los Baños (UPLB) is an expert on Philippine moths and other arthropods. Her work on the classification of little-studied moth families, forest and cave spiders, and native bees has
impacted biodiversity conservation and pest management.

She helped determine the identities of army worms and cut worms that caused outbreaks in different parts of the country. She coauthored descriptions of many new species of rice black bugs and worked on rice-infesting delphacid plant hoppers that were useful to local rice farmers.

The curator of the Museum of Natural History on campus, Barrion-Dupo believes such research highlights the importance of local museums as repositories of organisms and other biological information.

Dennis V. Umali, also of UPLB, is the only veterinarian in the country with a doctorate in Veterinary Science specializing in the Molecular Epidemiology of Livestock and Poultry Diseases. He focuses on molecular characterization of pathogens in poultry, which is important not just for the Philippine economy and agriculture but also the world.

Newcastle disease virus afflicts poultry worldwide, costing millions of dollars. Umali and his team were the first to perform a complete genome sequencing of the virus in Japan. They surveyed the pathogen in migratory waterfowls to map its distribution in the world. Salmonella is also a common poultry scourge. Despite vaccinations, disease outbreaks among poultry often occur.  Umali and his team studied the
organism at the molecular level, hoping to develop more effective ways to combat them.

Rex Ferdinand M. Traifalgar of UP Visayas studies crustaceans such as crabs, lobsters, crayfish, shrimp, krill and barnacles. He is especially interested in how they survive and why they die. He has researched how
immune compounds from brown algae have made cultured shrimp grow better and become more resistant to disease.

Traifalgar aims to improve aquaculture production through nutrition, physiology and immunology. He analyzes how to optimize rearing of shrimp larvae, enriching their diet,  reducing head deformities and using aquatic plants as best feeds for shrimps and mud crabs.

Allan Patrick G. Macabeo of the University of Santo Tomas, who also won the Third World Academy of Sciences Young Scientist Award, researches natural products from medicinal plants and sugar biomass to find innovative drugs and technologies. He has analyzed the potential of indigenous medicinal plants to fight tuberculosis, cancer and Alzheimer’s disease, comparing their efficacy with existing drugs in the market.

Macabeo has focused on sustainable resources such as sugar biomass to develop green synthetic methods to access important natural products. He is helping establish the vast potential of local resources as inexpensive medicine, highlighting the need to conserve natural forests.

Ocon and his team used green chemistry to develop new electrodes that provide higher energies than conventional lithium ion batteries.  They hope to develop better and greener batteries for smartphones and tablets.

Ocon’s team also developed new ways to convert carbon dioxide into valuable chemicals like ethylene, methane and methanol, and studied how ultrahigh sodium hydroxide could be used for solar production.

Enrico C. Paringit of UP Diliman dedicates himself to climate change and disaster risk management, especially the use of light detection and ranging (Lidar) technology. He and his team pioneered work on high-resolution, detailed and updated national  elevation maps, not just for the Philippines, but across the Asia-Pacific.

Since around 20 typhoons affect the country every year, the use of science to support national disaster mitigation efforts is essential. Paringit believes planning is key, including data from Lidar technologies.

The Aquino government assigned Paringit and his team to assess the  effects of Supertyphoon “Yolanda,” the Bohol earthquake, Typhoon “Pablo” (particularly across Compostela Valley) and cocolisap infestation.

Knowledge gained from Paringit’s work may be used in urban planning, infrastructure design and even insurance and agriculture.

Clarissa C. David of UP Diliman, who coauthored a book that received the Outstanding Monograph Award, specializes in political communication and public opinion, conducting research on health behavior change and policy analysis. David studied the validity of self-reported measures of hunger and poverty in the country, voting patterns for celebrity and  dynastic candidates, and social media use by journalists and news groups.

A decade ago, David spearheaded research on population and family planning. She studied the gaps
between knowledge and practice of family planning and contraceptive use among the poor, and the effects of male involvement in family planning decisions. She also studied how family planning became a political issue, specifically how it was framed in the last three decades and how it was debated in Congress and in media.