Obama to unveil ‘biggest step ever’ in climate fight 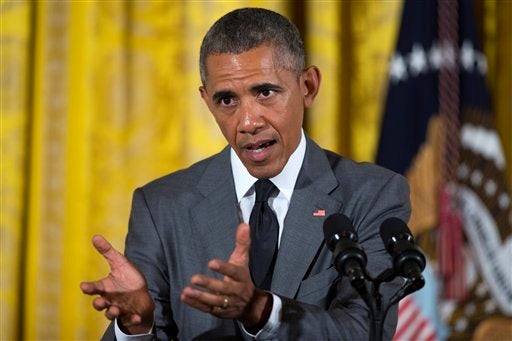 President Barack Obama speaks during an event with Young Southeast Asian Leaders Initiative fellows, in this file photo taken June 1, 2015, in the East Room of the White House in Washington.  AP

WASHINGTON, United States – US President Barack Obama will Monday unveil what he called the “biggest, most important step we’ve ever taken” to fight climate change, a sensitive issue central to his legacy.

The White House will release the final version of America’s Clean Power Plan, a set of environmental rules and regulations that will home in on the pollution from the nation’s existing power plants, setting limits on power-plant carbon emissions for the first time.

Plants will have to reduce carbon dioxide emissions by 32 percent from 2005 levels by 2030.

Laying out how climate change is a threat to the economy, health, wellbeing and security of America, and adding that time was of the essence, Obama said in a video released early Sunday: “Climate change is not a problem for another generation. Not any more.”

“Power plants are the single biggest source of harmful carbon pollution that contributes to climate change,” added Obama, who made the battle against climate change a core promise of his 2008 election campaign.

“But until now, there have been no federal limits to the amount of that pollution that those plants can dump into the air.”

He added that without imposing the unprecedented limits, “existing power plants can still dump unlimited amounts of harmful carbon pollution into the air weekly.

“For the sake of our kids, for the health and safety of all Americans, that’s about to change.”