Remember when President Aquino’s sisters seemed to have endorsed Vice President Jejomar Binay to be their brother’s successor last year? Apparently, they were scolded for it.

In an interview with the media over the weekend, the President’s youngest sister, television host and actress Kris Aquino, recalled the reaction of her brother after her statements were aired, widely perceived to be an endorsement of Binay.

“I remember I was flying to Dumaguete when that came out. When I turned on my phone, there was a long lecture from my brother,” Kris told reporters as she lined up to register as a voter in Quezon City on Sunday.

“I said [to the President], ‘I’d like to apologize if it put you in a bad light. There were certain words taken out of context. And at the end of the day, you know I will follow you,’” she said.

Last year, Kris declared on television her and her sisters’ support for a Binay presidency, pointing out that the ruling Liberal Party (LP) could take him as its standard-bearer for 2016.

“My sisters and I have been talking about it and we say that if this can bring about unity … and if he continues what Noy (Aquino) has started, why not?” Kris had said on the television program she cohosts with Boy Abunda.

Binay was an ally of the late President Corazon Aquino. But a rift is feared between the two families, especially after President Aquino endorsed Interior Secretary Mar Roxas to succeed him in 2016.

Roxas, Aquino’s running mate in 2010, was Binay’s opponent for the vice presidency then.

No rift with Binays

“I don’t think there’s a rift. Noy hasn’t said anything super-evil. And from the start, I think they (Binays) knew where Noy’s heart was,” Kris said.

“We can’t avoid that when [Binay] attacks my brother, it hurts. And I’m sure when Noy says stuff, they [Binays] get hurt. But I’d like to really believe our friendship will survive,” Kris said.

“You can’t be oversensitive in politics. Anne and I have talked about it, and we understand. This has been our lives. Our kids are classmates and friends. For us to be able to maintain this friendship, we just avoid talking about it,” she said.

Kris went to the Commission on Elections office at Quezon City Hall on Sunday to transfer her voter’s registration from Makati to Quezon City.

Kris said she had been a resident of a subdivision in Barangay (village) Bagumbayan for a year and eight months and had been running two businesses in Cubao.

By the elections in May, Kris will have transferred to a nearby subdivision in Barangay Ugong Norte.

Kris remained evasive when asked about her brother’s endorsement of Roxas and whether she’d lend her star power to it. “My brother and I had a long talk. He’s not the type who will ever impose,” she said.

Kris, however, disclosed that Roxas had invited her for coffee, which she agreed to, mainly because Roxas was her “god brother.”

Kris reiterated she had no plans to run in the 2016 elections as she was bound by endorsement contracts until 2017.

On Saturday, Kris stressed her family’s unity when she joined her siblings and friends in remembering the sixth death anniversary of their mother, democracy icon President Corazon Aquino.

“We are united as a family and that has kept us strong,” Kris said as she thanked those who came to Manila Memorial Park in Parañaque City.

Kris also shared the text message sent to her by sister, Pinky Aquino-Abellada, last week when the President fell ill.

Kris did not mention what ailed her brother but he admitted being sick when he delivered his last State of the Nation Address to Congress on July 27. The Inquirer learned the President had a bad case of vertigo that morning.

“The gist of (Pinky’s) text was … ‘Maybe we have been selfish. Maybe it’s time we prayed that he finds a real partner in life because it is sad to be alone,’” Kris said.

Kris told her sister, who was seated with the guests, that her text was still on her phone: “It was there, Pinky. You said it’s sad to be alone. I can show them!”

The audience and Aquino laughed as he stood on one side of the seats, beside his brother-in-law and Pinky’s husband, Manolo.

“It is sad to be alone and hopefully there’s someone who would take care of him,” Kris continued, quoting Pinky’s text message.

The story of the 55-year-old Aquino’s bachelorhood has endured throughout his presidency. 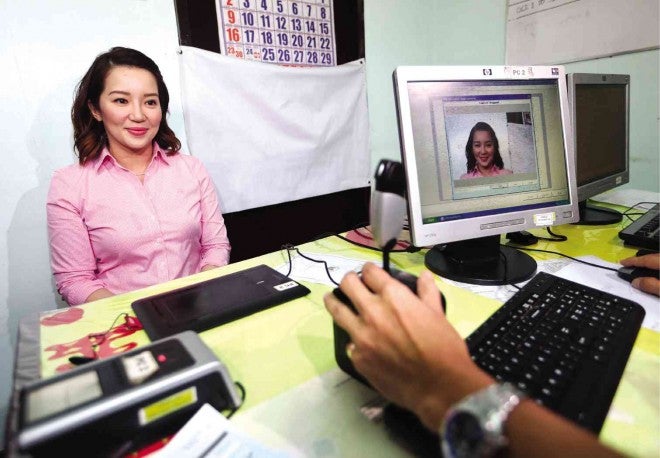 BIOMETRICS President Aquino’s sister Kris Aquino undergoes the biometrics process at the Commission on Elections office in Quezon City so they can vote next year. LYN RILLON

Aside from Aquino, the late President Elpidio Quirino was the only other Chief Executive who served in Malacañang without a wife.

Quirino, who became President in 1948, was a widower when he assumed office. His wife, Alicia, was killed with three of their children by Japanese soldiers during the Liberation of Manila in 1945.

His daughter, Victoria, assumed the role of first lady.

Kris is the youngest of five children of Cory and assassinated opposition leader, Sen. Benigno “Ninoy” Aquino Jr. She was in her element on Saturday, regaling the crowd with stories about her siblings.

Aquino pretended he was getting nervous by touching his chest when she began to talk about him and their sisters—Ballsy Aquino-Cruz, Pinky and Viel Aquino-Dee.

But aside from her brother’s love life, or lack of it, Kris told her mother’s loyal supporters how proud she and her sisters were of their brother.

“In any family, all of you have moments when you are very proud of each other and I think no one can take away from us how proud we are that our brother is Noynoy Aquino,” Kris said as everyone applauded.

She said she was certain that their mother “is very happy in heaven because we fulfilled our promise.”

Read Next
Binay to give ‘true’ Sona on Monday
EDITORS' PICK
Look Through: The fate of impounded stray dogs
Palace warns sugar hoarders after raid on Pampanga warehouse
What to watch out for when selecting a video surveillance solution
Unleash the photographer in you this World Photography Day with vivo smartphones
House energy committee chair Arroyo bats for cheap electricity
Metro Manila’s COVID-19 cases on downward trend, but surge not over — OCTA
MOST READ
Man abducted in Batangas gasoline station, found dead in Quezon
LOOK: Miel Pangilinan dazzles in glittery pre-debut shoot
PNP bars US legislators’ visit to De Lima due to lack of authority from court
WATCH: Rick Astley re-creates ‘Never Gonna Give You Up’ music video 35 years later
Don't miss out on the latest news and information.