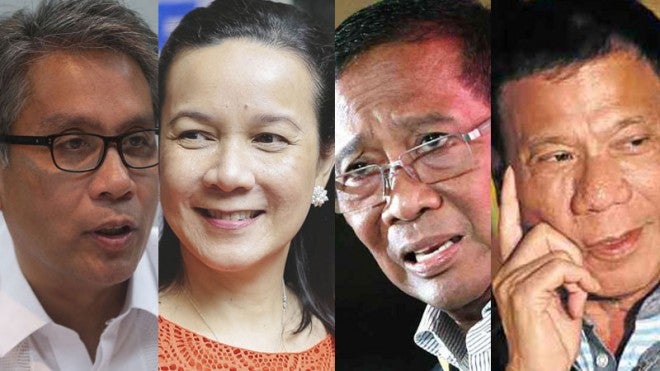 LUCENA CITY, Philippines—Former Akbayan Rep. Walden Bello is disappointed with the four potential presidential candidates in next year’s general elections and he has an uncomplimentary tag for each of them.

“My great disappointment with all four candidates comes through clearly since our country really can come up with better people,” Bello said in an online interview on Saturday.

A former staunch ally of President Aquino, the Akbayan leader cut his ties with the administration coalition in March over what he considered a Malacañang cover-up of the Jan. 25 clash between police commandos and Moro rebels in Mamasapano, Maguindanao province, that left 44 police officers dead.

He also disagreed with President Aquino over the Disbursement Acceleration Program (DAP), which the Supreme Court struck down as unconstitutional, the retention of Agriculture Secretary Proceso Alcala, Agrarian Reform Secretary Virgilio de los Reyes and Budget Secretary Florencio Abad, all of whom he described as “dead weights.”

An academician and veteran activist, Bello described Roxas as a “nice guy” and “harmless.” He said Roxas was “clean but, unfortunately, hollow.”

“He reminds me of passages from T.S. Eliot’s ‘The Hollow Men,’ especially the lines, ‘Shape without form, shade without color, paralyzed force, gesture without motion,’” said Bello, a senior analyst for Focus on the Global South and professor of sociology at the University of the Philippines.

He noted that Roxas did not speak up on a number of issues, particularly agrarian reform, security of tenure for workers, overseas Filipino workers and greater income equality.

“So whose interests does he actually represent, except [those of] the Makati Business Club, which loves him? He will maintain the social status quo, and this is why he’s harmless,” Bello said.

According to him, what the country needs is a President “who will attack vested interests and not one who will protect them.”

He said Roxas’ biggest problem in his quest for the presidency, even with the endorsement of President Aquino, was the botched Mamasapano counterterrorism operation.

“Why did he not resign since being excluded was a damning sign that the President did not trust him? He’s going to collapse under the withering fire of people who will raise these issues in the campaign,” Bello said.

He said it would be disastrous for Akbayan to support Roxas just because of the President’s endorsement and for the party to remain a member of the administration coalition.

“The greater danger facing the party (Akbayan) is its being perceived as obediently tailing behind the Liberal Party (LP). That would alienate it from the left while not endearing it to the middle who would prefer real middle-of-the-roaders,” he said.

Bello said he hoped Akbayan’s “progressive colors will not be completely erased by the yellow brush.”

What does she stand for?

On Poe, Bello said: “I like Grace personally, but she’s a blank slate.”

He said Poe had been a recent focus of attention “simply as someone with a famous name” that could prevent a Binay presidency “since [Roxas] does not have the mass appeal to be able to do this.”

He said Poe was being groomed as an “anti-Binay” rather than as a candidate “with a discernible propeople program.”

“We don’t really know what she stands for at this point,” he said.

With charges of corruption hounding Binay and his family, Bello called the Vice President “bad news.”

If Binay would succeed President Aquino, Bello said, it would be the “second coming of the corrupt GMA (Gloria Macapagal-Arroyo) presidency.”

“Unfortunately, his approach is to say, ‘Hey, I’ll give you handouts like a cake on your birthday; all I want is for you to close your eyes while I also have my cake,’” Bello said.

He said a Duterte presidency “would be the second coming of the Marcos regime, with its disregard for basic human rights.”

“Unfortunately, given the crime wave and the deterioration in effective policing that took place under P-Noy’s buddy, former PNP (Philippine National Police) Chief Alan Purisima, many people are willing to give Duterte’s iron fist a chance and suspend their concerns about due process and human rights,” Bello said.

But he added: “I think that this is still a minority, though.”

Bello led Akbayan in supporting Aquino in the 2010 presidential election.

Akbayan allied with the LP when its former representative and party chair, Risa Hontiveros, ran for a seat in the Senate in the 2010 and 2013 elections. She lost both races, but she is now director of Philippine Health Insurance Corp.

A number of other Akbayan members are also in the government, including Presidential Adviser on Political Affairs Ronald Llamas and National Anti-Poverty Commission Chair Joel Rocamora.

Bayan: If Abaya’s innocent, why not charge Roxas on MRT fiasco?