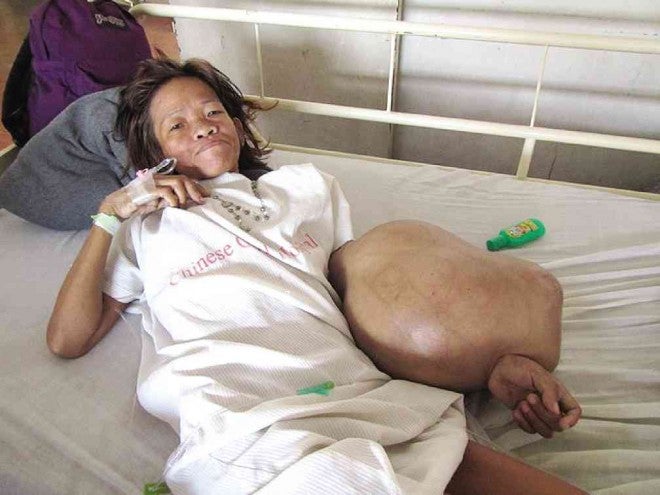 Caparas likens having a 20-kilogram tumor on her arm to carrying a child you can’t put down. CONTRIBUTED PHOTO

Adelina Caparas may have lost one of her arms to cancer. However, she has gotten back something more important—hope and a reason to smile again.

Since 2012, the 40-year-old mother of three had been weighed down by a 20-kilogram fatty mass which started growing on her left arm after a bad fall.

By the time she went for a checkup to the doctor in June this year with the help of Catholic nuns from the order of the Missionary Servants of the Word (HMSP), the tumor had ballooned to the point where it covered her arm from the elbow to the wrist.

“It’s very heavy. It’s like carrying a child on your arm only you can’t put it down when you’re feeling tired,” Caparas said in a recent interview.

Doctors who examined her later diagnosed her with bone cancer. Upon their advice, her arm was amputated on July 16 in a procedure made possible by the Buddhist Tzu Chi Foundation.

Before she was operated on, Caparas was resigned to the idea that her life would never be normal again.

In 2011, her husband ended up in jail, making her the sole breadwinner for her family composed of her three children, her 61-year-old mother and a 3-year-old grandson.

Then the following year, she stumbled on a rock, resulting in a bad fall that led to the growth of the tumor. Caparas said she became self-conscious when the mass took over most of her arm. She started to avoid other people, locking herself up inside their house in Tondo, Manila.

As the tumor kept growing, Caparas had difficulty standing up even to go to the bedroom, making her wet the bed, especially at night. For a long time, she had lost the will to live until Tzu Chi volunteers showed up at her doorstep on July 9.

“The volunteers revived her hope,” said Leonida Alnas, a neighbor and close friend of Caparas. Caparas is all smiles after her surgery. CONTRIBUTED PHOTO

It was through Alnas that HMSP nuns learned of Caparas’ plight. In turn, the nuns sought the help of nongovernment organizations until they got in touch with Tzu Chi Foundation.

“I am very happy to know that this foundation exists [and] it really helps the poor because it’s very easy to forget… the ones who need help. I will pray for the foundation to continue helping others,” Sr. Guadalupe Granada of HMSP said.

Days after Caparas was operated on at the Chinese General Hospital, Tzu Chi volunteers dropped by for a visit, bringing a cake and flowers to help her celebrate her birthday. With them were her children, her mother, sisters and other relatives who wanted to wish her well.

Although she has lost one limb, Caparas is now the picture of happiness. She talks animatedly and laughs often.

“I thought I would never see the world again. But because of Tzu Chi, I have been relieved of the heavy burden I carried and left me bedridden. Now, I feel so light. I am very grateful,” she said.

“If no one had come to help Mama, she wouldn’t be this happy now. We will take good care of her,” added her son Carlo.

“Master Cheng Yen (founder of Tzu Chi Foundation) said that the greatest success in life is to stand up from failure. This rings true for Adelina. Having the tumor removed means a new life and fresh beginning for her,” said Tzu Chi volunteer Mila Tan.

Although Caparas’ cancer has now reached stage four and there is no telling what lies ahead, she has no fears as she is surrounded by her family and friends, ensuring that her days will be filled with love and hope.