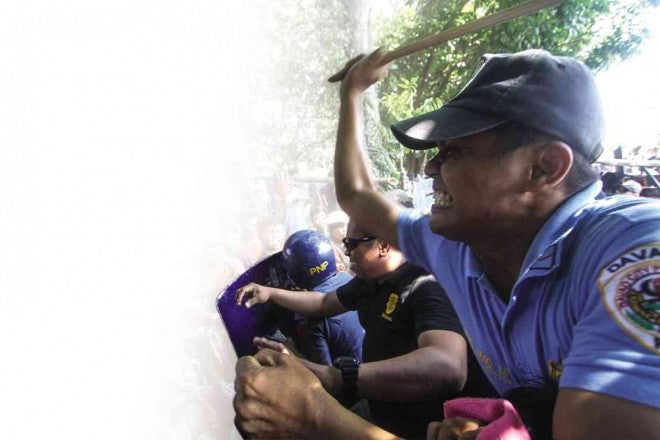 A POLICEMAN strikes with a truncheon the group of Manobo “lumad” protesting moves to force them to go home to what the lumad said was a heavily militarized community. KARLOS MANLUPIG

Screams broke the silence along Father Selga Street here as women, carrying children and belongings, ran as policemen, wearing antiriot gear and wielding shields, on July 23 stormed Haran House, operated by the United Church of Christ of the Philippines (UCCP).

The policemen raided Haran to force some 700 Manobo “lumad” from Talaingod in Davao del Norte province and Bukidnon province, who have been seeking refuge there since May due to alleged military abuses in their villages, to return home.

Datu Doloman Dawsay, leader of the tribal group Salugpungan Ta Tanu Igkanugon, held on to a pole of one of the tents and shook his head as he said that they have nowhere to go if they are forced to leave the compound, which serves as the lumad’s evacuation center.

“They are really evil. How can they do this to their fellow human beings?” Dawsay said.

The commotion started after several government agents, wearing civilian clothes and masks, cut the chain that bound Haran’s gate with a bolt-cutter while the antiriot police assembled nearby.

At least 18 Manobo lumad, who tried to prevent the policemen from entering the UCCP compound, were injured during the raid carried out upon the request of North Cotabato Rep. Nancy Catamco. Datu Benito, a 50-year-old Manobo leader, was among the injured.

“We thought we were safe from abuses here but then the police came and beat us up. They’re no different from the military attacking our communities,” Benito said.

Catamco, chair of the House committee on indigenous peoples, stayed inside her car during the melee.

The day before the raid, Catamco told reporters that she would forcibly rescue the lumad, who were being used by militants to pursue their antigovernment and antimilitary agenda.

“We know that they are being manipulated. They were fetched from their villages and were brought here,” she said.

Catamco also said she doubted that the Manobo villagers fled on their own or were really evacuees. She said she was puzzled why the supposed evacuees sought the help of militants instead of government agencies.

Because she firmly believed they were being held in Haran against their will, Catamco said she would lead the “rescue” of the Manobo from Haran.

But the rescue became a traumatic event for Manobo children, who cried out of fear, as policemen—led by the deputy police city director, Supt. Marvin Pepino—forced themselves into Haran at 7 a.m., just minutes after teachers were giving lectures to children in two makeshift classrooms.

Leaders of Salugpungan Ta Tanu Igkanugon tried to negotiate with the police after the melee but the tension did not subside.

Kerlan Fanagel, spokesperson for Pasaka Confederation of Lumad Organizations, questioned the raid, saying the police had no legal basis to conduct it. There is no court warrant that legalizes the raid, he said.

But Chief Insp. Milgrace Driz, spokesperson for the city police, said the raid was carried out after the Department of Social Welfare and Development (DSWD) reported that women and children were being held inside Haran.

“The intention was to rescue children and women and [persons with disabilities] who were being forcibly held inside. We already have an implementation plan about this before but we need the documentation. Early this morning, the DSWD filed a [complaint] and we acted on it,” Driz told the Inquirer.

“We were there to rescue, but there was resistance,” Driz added.

Pedrita Demaquiling, head of the Community-Based Service Unit of the DSWD, said the violence that resulted from the rescue was unintended.

She said the DSWD wanted only to bring home those who were willing to leave Haran.

Datu Kailo Bontulan, one of the leaders of the evacuees, said even the DSWD recognized that continued military presence in the lumad’s villages could not be stopped, forcing the Manobo to flee and refuse to go home.

“How can the problem be solved without solving its cause? It’s like cutting the branches but not killing the roots,” Bontulan said.

As the tension continued to rise even after the raid, an angry Vice Mayor Paolo Duterte arrived at Haran and immediately ordered the police to stop.

He faced the police and some people allegedly brought in by the local government of Kapalong, Davao del Norte, to keep a distance from Haran.

“You shut up because you are here for trouble. I am here to enforce democracy. Those who want to go with you are free to leave and I will personally bring them to you. But those who will decide to stay here can stay because it is their right to stay,” Duterte told police and the Kapalong crowd.

He also asked the police to disperse the crowd in Kapalong.

Duterte said the gates of Haran would be opened for an hour to allow those who want to go with Catamco. No evacuee stood up.

Pirot Malibato, who claimed that his parents and siblings were among those “illegally detained” inside Haran, was later seen debating with his 80-year-old father, Anayak, and his brother, Alvin.

The elder Malibato told Pirot, who arrived with the police, that he feared going back because soldiers had harassed them in the past. He said it was better for them to stay in Haran.

“Until you are with the military, I will not recognize you as my son,” Anayak said as he turned his back on Pirot.

A teary-eyed Pirot, who wore shoes issued to militiamen, said: “I now understand you and I will not ask you anymore to go with me back to our village. And I will promise that I will never use guns against our own people.”

The vice mayor said he could never allow violence in the city and that he would protect the lumad in Haran.

“I will resign if someone will die here today. And I am doing this because this is my job. Right now, we consider these lumad our guests,” Duterte added.