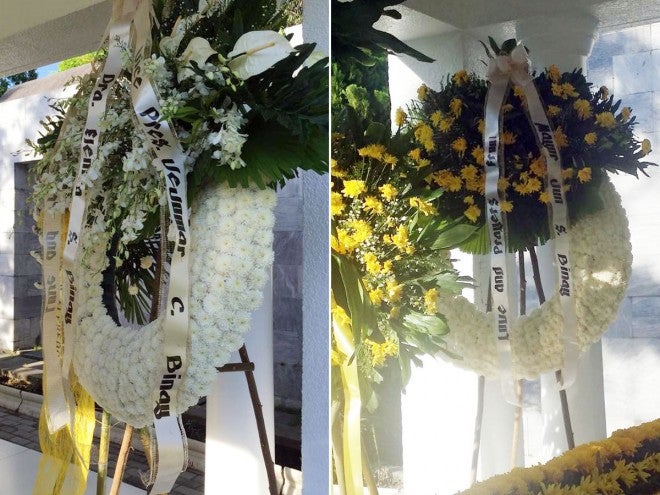 Two wreaths, bearing the names of the two officials, were seen placed near Cory’s tomb, which is surrounded by the graves of other members of the Aquino family including Senator Ninoy Aquino Jr., whose death was pivotal in the uprising against the Marcos dictatorship.

“Six years since her passing, President Cory continues to inspire us as we move to build a better nation where all Filipinos share the fruits of progress and government places the welfare and interest of the people above party politics and economic interests,” the Vice President said in a statement.

Binay, an opposition leader, is the presidential bet of the United Nationalist Alliance. He had close ties with the Aquino family, especially after being appointed by Cory as officer-in-charge of Makati after the restoration of democracy.

The flowers were sent a day after Interior Secretary Manuel “Mar” Roxas II was endorsed by President Benigno Aquino III as presidential candidate in the 2016 elections.

Recently, the Aquino and Binay camps have been engaged in a word war.

The Vice President in June resigned from the Cabinet, claiming that he was not treated well and that the administration was insensitive to the plight of the people, in addition to being inept.

Aquino, on the other hand, surmised that Binay broke ties with his administration because he could not get an endorsement from the president.

READ: Aquino on Binay: I saved him from being spare tire

The younger Binay was suspended from office by the Office of the Ombudsman for his involvement in the alleged overpricing of the Makati City high school.