Aquino names Mar of the hour

Roxas finally gets his shot at the presidency
By: DJ Yap, Marlon Ramos - @inquirerdotnet
Philippine Daily Inquirer / 02:22 AM August 01, 2015
ADVERTISEMENT

The man who once stepped aside for his close friend and political ally now gets his own shot at the presidency.

Swearing by the memories of President Benigno Aquino III’s parents, the late democracy icons Benigno “Ninoy” Aquino and Corazon “Cory” Aquino, an emotional Interior Secretary Mar Roxas on Friday jumped into the 2016 presidential race, declaring his readiness to take on the call to pursue the “straight path,” the Aquino administration’s reform program.

His voice cracking, Roxas vowed to honor the unsullied legacy of the President’s parents. He also thanked Mr. Aquino for the trust and support he had given him.

“I, Mar Roxas, accept the challenge of our bosses to continue, expand and fight for the straight path,’” Roxas said at the end of his 15-minute acceptance speech, drawing thunderous applause from his supporters who filled the historic Kalayaan Hall of Club Filipino in Greenhills, San Juan City.

READ: ‘I am Mar Roxas, I accept the challenge of my bosses’ / Aquino officially endorses Mar Roxas as LP standard-bearer

It was the same hall where Roxas, then primed to seek the presidency in the 2010 elections under the banner of the Liberal Party (LP), announced that he was giving way to Mr. Aquino, whose popularity suddenly soared after the death of his mother.

This time, it was Mr. Aquino’s turn to heap praises on his friend and rally the LP’s “yellow army” behind him.

“Club Filipino brings back so many memories,” Roxas said. “This is where President Cory took her oath in 1986. As mentioned by the President, this is also where he accepted the calls for him to lead and where he said that we can now dream again. This is also where I first said ‘country first before self.’” 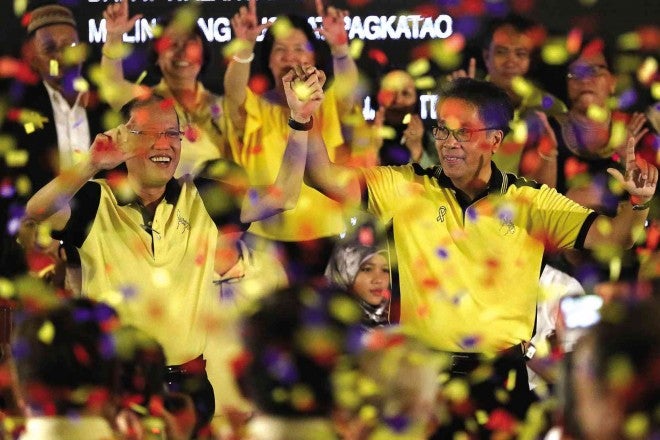 YOU’RE THE MAN! Amid a rain of colorful confetti, with yellow dominating of course, President Aquino raises the hand of Interior Secretary Mar Roxas whom he endorsed as standard-bearer of the Liberal Party (LP) in next year’s presidential race, in what is billed “A Gathering of Friends” by the LP held on Friday at the historic Club Filipino in Greenhills, San Juan City. RAFFY LERMA

Turning to the President, Roxas said: “This is a great privilege and I promise not to besmirch their names. And I will definitely not tarnish your name.”

“With this endorsement, you are also passing the dreams and strength of the 100 million Filipinos [to me]. To my bosses, I will not betray your trust,” he said, referring to the Filipino people.

Roxas, who lost to Vice President Jejomar Binay in the 2010 elections, had apparently traded his original political color, blue, for the more popular yellow of the LP.

Roxas’ mother, the clan matriarch Judy Araneta-Roxas, was observed crying as his son recalled how the death of his brother, the late Capiz Rep. Gerardo “Dinggoy” Roxas Jr., catapulted him from being an investment banker in New York City to a national political figure.

His wife, television reader Korina Sanchez, said the President’s endorsement was a big boost to her husband’s candidacy, pointing out that Mr. Aquino was the only President whose popularity rating remained above 50 percent in the last year of his term.

Amid rumors that the President would endorse Sen. Grace Poe, the new front-runner in the presidential polls, Sanchez said she and her husband did not doubt Mr. Aquino’s choice of his successor.

In his speech, Roxas said he had no plans of going into politics although he came from a family of politicians. He said his brother, who succumbed to cancer in 1993, was supposed to carry on the tradition started by their grandfather, the late President Manuel Roxas, and their father, the late Sen. Gerry Roxas.

“This principle is in our blood; you have the obligation to serve. Put the collective first before your self,” he said.

“I could not turn my back on the memories of my father, Dinggoy and our grandfather. It’s my duty even though I know that my life would change… I had to do justice to what I had been taught and to what I knew in my heart was right. I accepted the responsibility,” he said.

In all the events he had attended as a government official across the country, Roxas said what struck him most was the fact that all Filipinos were “united by our aspirations.”