Cabinet officials drop under the table 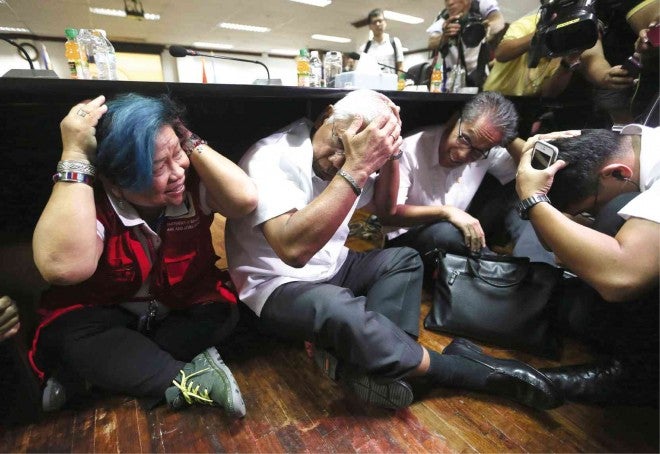 The earth did not really heave and shake.

But Defense Secretary Voltaire Gazmin, Interior Secretary Mar Roxas, Social Welfare Secretary Corazon “Dinky” Soliman and Transportation and Communications Secretary Joseph Emilio Abaya, who pretended to be in a meeting, took cover under the conference table at the National Disaster Risk Reduction and Management Council (NDRRMC) as the siren went off at 10:30 a.m. yesterday.

The “duck, cover and hold” position lasted for seconds before the officials went down from the NDRRMC building inside Camp Aguinaldo covering their heads with their hands.

Using a microphone, a soldier announced the start of “evacuation” and a group of employees of the Department of National Defense joined the four officials in fleeing the building.

In the field, four Sokol and Huey helicopters were waiting.

At the grandstand, the officials were briefed by NDRRMC Administrator Alexander Pama on what was going on around the capital.

Then the four officials, accompanied by Armed Forces of the Philippines Chief of Staff Gen. Hernando Iriberri boarded a Sokol helicopter for a 20-minute aerial inspection of the damage.

They returned to report to the media what they had seen.

AFP first responders who had been regularly training for “very effective” handling of the situations related to natural calamities participated in the earthquake drill.

Gazmin said the drill was very important in minimizing casualties and educating the public on the measures to be taken in the event of an earthquake. He urged those who did not take part to practice the measures at home.

“There are still a lot of gaps that need to be addressed. I think there will be simulations [of situations after an earthquake hits at] night. We would know what would be lacking and after that we would come up with a general critique,” he said.

Roxas said the initial drill was not impressive, but could be improved in succeeding drills.

“We’re never satisfied. We can always improve. There is no perfection here. What we are doing is seeing where we can get stronger, where we can be trained, where we can widen,” he said.

Among the gaps, he said, are in food preparation and in provision of pneumatic equipment that would be needed in rescuing people trapped in collapsed buildings.

“We are used to preparing and responding to typhoons but earthquake is different,” he said.