Floating hospital given key role in ‘Big One’ 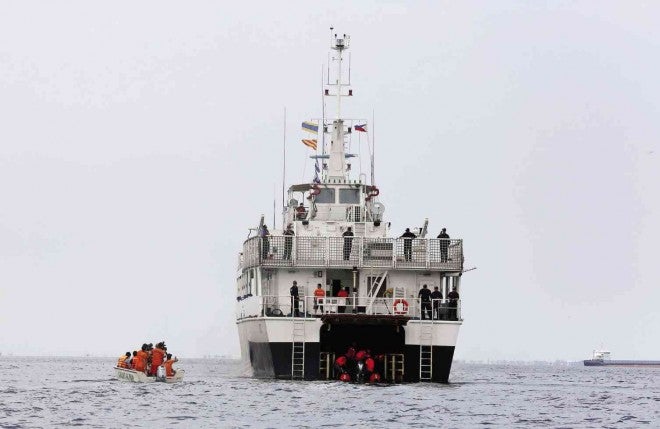 When the “Big One” strikes, Metro Manila hospitals may face their biggest challenge yet in accommodating the wounded. But what if these structures are also badly affected or rendered inaccessible by the temblor?

This was the scenario in mind when Thursday’s Metro-wide “Shake Drill” included the setup of a floating hospital off the Manila Bay coast in Manila.

The Philippine Coast Guard’s BRP Pampanga, anchored about 500 meters from the shore, took in seven quake “victims” for initial treatment. In the exercise, the seven were extracted by rescuers from “collapsed structures” near the bay, like the Ramon Magsaysay Building, Philippine Amusement & Gaming Corp. and Diamond Hotel.

It took about 10 minutes to put them on rubber boats and bring them to the ship. From there, they were later transferred to the central command center set up by the Metropolitan Manila Development Authority (MMDA) on Aseana Park in Pasay City.

With its own team of doctors, nurses and staff, including Philippine Red Cross volunteers, BRP Pampanga is a hospital ship that can accommodate 150 patients, according Coast Guard spokesperson Cmdr. Armand Balilo, one of the officials who oversaw the “seaborne evacuation” as part of the MMDA-organized drills.

“We can also use it for evacuations especially (for those) in tourist areas in Manila,” he said. “If there are not enough doctors on board, we will request intervention, probably from the Air Force to conduct helicopter evacuation from the boat to (another) hospital.”

In Mandaluyong City, the biggest, simultaneous disaster response drill staged in the capital brought back grim memories for Maribeth Lanon.

Lanon counts herself as a survivor of the 1990 Luzon earthquake. But for Thursday’s drill simulating a 7.2-magnitude earthquake, she wasn’t as lucky as she was hit and crippled by “falling debris” at SM Megamall.

Within five minutes after being pinned down, she was found by a first-aid team and whisked away in an ambulance.

About 2,000 early shoppers and store employees poured out of the mall in orderly fashion and into the parking lot. A security guard made them write their names on a list, based on the floor where the evacuees were when the quake hit. The list was made in case their loved ones are searching for them. With Maera Tezuka