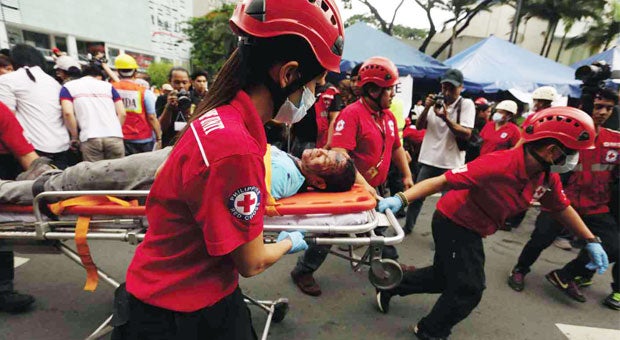 EVACUATING THE INJURED Members of the Makati City rescue team evacuate an “injured” person from a building for treatment at a nearby medic staging area as part of simultaneous earthquake drills in Metro Manila in preparation for a 7.2-magnitude quake expected to hit the metropolis anytime. EDWIN BACASMAS

A long, monotonous alarm followed by the giddy shrieks of young girls pierced the quiet halls of Miriam College at the start of the first-ever Metro-wide earthquake drill on Thursday morning—a scene of children rushing out of rooms at playtime repeated on campuses elsewhere.

Once safe in the evacuation areas designated in open areas, the grade school students giggled and chatted among themselves while their teachers made sure everyone was accounted for.

“Hey, listen to your teacher!” whispered a mother at Miriam, only 700 meters away from the 100-kilometer-long West Valley Fault Line.

The drill conducted by the Metropolitan Manila Development Authority (MMDA) was aimed at getting people to learn simple things, like the location of fire exits and prompt them to prepare flashlights and whistles that could save lives in real disasters.

“This is not just a drill fulfilled, this is a dream fulfilled,” he said, adding that a lot could still be done, including the yearly conduct of a similar simulation every July 30.

He added that from a 5.5, the level of preparedness of Metro residents climbed to 7 after the drill where an estimated 6.5 million individuals from schools, local government units, malls, BPOs and business establishments took part.

Asked for the areas of improvement, Tolentino said they want to include nearby provinces like Rizal, Bulacan, Cavite and Laguna which will also be affected by the movement of the West Valley Fault.

“The communication among quadrant commanders and mayors of the LGUs is also vital for this kind of disaster,” added Tolentino, saying that this was one of the main exercises they practiced on Thursday.

He said he was impressed with the simulations at the Makati City Central Business District. “It was almost perfect,” Tolentino added but said businesses should just check the structural integrity of their buildings if these can withstand a powerful jolt.

When the alarms sounded signaling the start of the Metro Manila Shake Drill, hundreds of thousands poured out of schools, office buildings and shopping malls during the hourlong massive drill beginning at 10:30 a.m. to prepare for a 7.2-magnitude earthquake that experts feared could kill more than 35,000 and displace millions in the metropolis.

Many were smiling and taking pictures and videos with their cell phones.

Renato Solidum, who heads the Philippine Institute of Volcanology and Seismology (Phivolcs), has warned that the West Valley Fault, which cuts across the capital of more than 12 million people and outlying provinces, could shift anytime based on its seismic history. The death and devastation could be severe if the public and government would not be prepared, he said.

“In a real earthquake, the ground will shake and you will not be able to stand up so we need to remember the ‘duck, cover and hold’ practice’ then evacuate to an open area,” he said yesterday.

Solidum said the hardest part of the drill was the response to fires and collapsed structures especially in case of casualties and injured persons.

“This has increased the awareness of the people who can be potential victims of an earthquake. We convert this to preparedness and continue it,” Solidum added.

During a meeting of disaster relief officials later, Public Works Secretary Rogelio Singson said roads should be retrofitted and buildings should be assessed for remedial measures to be done.

He said a scenario that can bring about a catastrophic damage is the possible collapse of the Angat Dam in Bulacan province.

“If the Angat Dam will collapse, there will be flooding in Metro Manila and 97 percent of our potable water supply will be affected,” Singson said, adding that the retrofitting of the dam has already started to minimize damages during a quake.

As pocket simulations were conducted in various parts of Metro Manila, Tolentino gathered the Metro Manila Disaster Risk Reduction and Management Council, which he also heads, at their command center at Aseana in Parañaque City, and prepared for rescue and response operations.

The same site served as the staging area for the management of the dead, fire scenarios, debris clearing simulation, air rescue and medical response activities with more than a thousand participants from various emergency response groups like the Bureau of Fire Protection, Philippine Air Force, Red Cross, Coast Guard among others. Not only ambulances and fire trucks responded to the evacuation and staging areas but there were also four military choppers, two helicopters and a rescue aircraft which aided in the response and rescue operations.

Based from the data of various ground commanders, there were 120 individuals listed dead, 480 fires, about 1,000 injured and millions evacuated during the earthquake drill.

The dead were brought to the temporary mass grave also at Aseana where 25 casualties were immediately placed in cadaver bags since they were tagged “severely mutilated” while the other casualties were temporarily buried in 6 by 6 meters temporary graves.

Members of the National Bureau of Investigation and the Philippine National Police also helped in getting the fingerprints and descriptions of the dead for identification.

At the Camp Crame Elementary School, a female Grade 6 student fainted during the evacuation exercise.

Chief Supt. Efren Perez said the actual drill lasted 14 minutes but they could have done it faster.

“Some of our policemen know this is only a simulation so they tend not to move as fast. But if this were the real thing, this is over in five minutes,” he said.

The 5,000 participants of the drill evacuated to the Camp Crame transformation oval in front of the grandstand, the biggest open area in the police camp.

Even moving vehicles inside the police camp stopped, while police officials also joined the drill.

The policemen were reminded to first wait for the shaking to stop before evacuating to the open area, and to always “drop, cover and hold.”

In an interview after the exercise at the National Economic and Development Authority, Socioeconomic Planning Secretary Arsenio M. Balisacan called for more frequent disaster drills.

Citing a global study, Balisacan said that a $1 investment in preparedness would bring a benefit of $3-30, depending on the type of disaster. He cited that Supertyphoon “Yolanda” in 2013 shaved off at least 0.3 percentage points of the country’s gross domestic product (GDP) and had its effects lingering in succeeding quarters’ economic growth.

Partly as a result of Yolanda, economic growth slowed to 6.1 percent last year.

“We can no longer ignore the cost [of disasters], and the benefits [of preparedness] are very high. It’s hard not to put money into disaster preparedness,” said Balisacan. With reports from Jeannette I. Andrade, Niña P. Calleja, Miguel Camus and Riza T. Olchondra