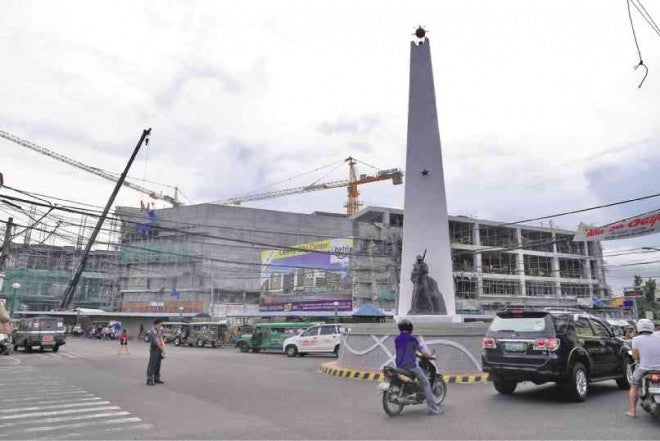 CONSTRUCTION of the P1.6-billion LCC-Ayala Mall venture is now in full swing and is slated for completion by December this year. MARK ALVIC ESPLANA

Retailers in Legazpi City in Albay province expect more brisk and competitive business next year with the entry of an Ayala-developed multimillion-peso mall into its thriving consumer market.

“Buyers at the wet market would now prefer to shop in a cool, clean and comfortable shopping center,” said Yves Yu, manager of the homegrown Jackie Merchandising.

The P1.6-billion project is now in full swing and construction is slated for completion by December this year.

Liberty City Center Mall (LCCM), a four-story commercial complex built in the Legazpi Port business district, is a joint venture of Ayala Group of Companies and LCC Corp., owner of a chain of supermarkets and malls of the same name, which are operating in key cities and towns in the Bicol region.

The Ayala group is building the complex and and will operate it while LCC will provide the anchor department store and supermarket, said Antonio Tan, LCC president.

The complex sits in a 1.4-hectare lot owned by the city government and leased by LCC under a 50-year lease agreement, for an annual rent of P5.5 million. Tan said P16.5 million in advance rental had been paid to the city treasurer’s office.

Dindo Fernando, Ayala Group’s assistant vice president for external affairs, said in a press briefing with Tan on Monday that the mall would have 300 stalls and would showcase local and high-end merchandisers of shoes, bags and clothing apparel, appliances and hardware, among others.

It will also have fast food chains, restaurants, bookstores and coffee shops, and four cinemas and an entertainment center on its fourth floor.

To solve the parking problem, an underground parking area that can accommodate as many as 250 vehicles will be provided.

Fernando said 30 stalls would be available to local business operators who are interested to display and sell their merchandise at the mall.

Local business owners said the birth of another commercial mall would make the retail sector in the city more competitive.

Yu said the entry of the Ayala-operated mall would bring both positive and negative impacts to the retail sector of the city. But these would depend on the market share and would be felt over time, he added.

Most likely to be affected first would be retailers at the Legazpi City market, which is situated beside the new LCC Mall. “Buyers at the wet market would now prefer to shop in a cool, clean and comfortable shopping center,” Yu said.

Garments, footwear, dry goods and souvenir stores, and small groceries in the same business area will also feel the effects.

Yu, however, believed that the negative effect would be short term.

To counter this, “retailers and owners should adapt and make innovations to level off with the market competition,” he said. “We have to be creative, innovative in meeting this challenges.”

He expressed optimism over the capability of local businesses to meet the challenge of having a big-time competitor. “We have to be ready, at the end of the day it will bring more benefits,” warning that “those who can’t adapt innovation, would better close (shop).”

As for the long-term impact, Yu believed that the establishment of LCC Mall would eventually further improve the economy of Albay, particularly that of Legazpi.

It would create new jobs, thus bringing down the unemployment rate of the province, he said.

Another positive effect, he said, would be the entry of national brands in the local market. “You don’t have to go to Manila to buy signature items that are not yet available here.”

As for competition among super malls, it would all depend on how they would study the market flow and the preferences of the target consumers, Yu said.

The Ayala-LCC mall, Ayala Group’s first venture in Bicol, is expected to create some 3,000 jobs, according to Hans Katipunan, business development manager of Ayala Group.

At present, around 1,000 workers have been given employment to construct the mall complex, he added.

Katipunan said a soft opening would be scheduled for December this year. He projected a daily traffic of about 25,000 to 30,000 customers once the mall becomes fully operational.

The projected clients are not just those from Legazpi and nearby areas in Albay but also those coming from Sorsogon City and towns in Sorsogon province, and even from as far as the island-provinces of Masbate and Catanduanes.

According to Katipunan, the mall would cater to all classes, bringing into the mall a mix of high-end to tiangge types of consumer goods and products.

LCC Mall will be Ayala Group’s 30th commercial complex to be set up in the country, coming after the recently inaugurated mall in Iloilo City.

LCC Corp. operates three regional malls in Legazpi and Tabaco City, also in Albay, and in Naga City in Camarines Sur province, aside from its eight community malls and 40 expressmarts across the region.

Legazpi Mayor Noel Rosal, during the same briefing, welcomed the joint venture as an economic milestone for the city, which has recently been named one of the country’s liveable cities.

The mall would also bring value added revenues in the form of business taxes and income tax return, he said.

Rosal said Ayala Group had also expressed interest in developing a subdivision, resort, hotel and a condominium, as well as in operating an 18-hole golf course in the capital city.

Two local ventures, Yashano and Gregorian malls, are both under construction, also within the city’s business district.