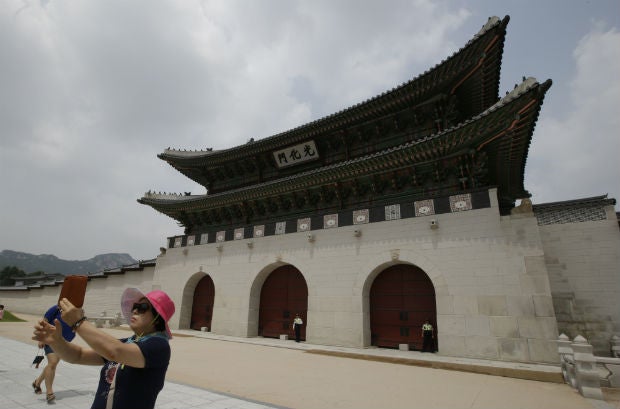 A woman takes a selfie near the Gwanghwamun, the main gate of the 14th-century Gyeongbok Palace and also one of South Korea’s well known landmarks in Seoul, South Korea, Tuesday, July 28, 2015. South Korea said Tuesday it is now virtually free of the deadly MERS virus that killed 36 people and sickened nearly 200 since an outbreak was declared in May. AP

Seoul announced that it will make efforts to change the nation’s hospital culture, which involves family members staying with patients in hospital rooms as main caretakers, after declaring a “de facto end” to the outbreak of the Middle East respiratory syndrome Tuesday.

“We now confirm that the citizens can worry no more (about the possible infection),” Prime Minister Hwang Kyo-ahn said, announcing that the outbreak in South Korea is practically over.

“I ask the public to shake off all your worries (over Mers) and return to your normal lives, enjoying economic, cultural, leisure and academic activities.”

The current hospital system, in which family members provide basic care normally carried out by nursing staff in other developed nations, has been largely blamed for the Mers spread, which has claimed 36 lives here since May. Many Koreans who contracted the virus did so while caring for their family members at Mers-affected hospitals.

In its efforts to prevent hospital-acquired infections, the Health Ministry will now require all visitors at medical facilities to register at the entrance. The ministry is also thinking of ways to minimize the number of visitors — those who come in for the sole purpose of visiting or caring for inpatients — to hospitals.

“We certainly think that there should be a new system which prevents hospitals from receiving too many visitors all at once,” said Kwon Deok-cheol, head of the central Mers task force. “It’s important to prevent any infectious virus from entering the country. But we have realized that it is also equally important to build a system that minimizes the risk of hospital-to-hospital transmission.”

Kwon also pointed out the Korean practice of seeking care at multiple hospitals, known as “doctor shopping,” was one of the main factors contributing to the spread of the Mers virus in the country.

“What doctor shopping does is it triggers so many patients living nationwide to seek treatments at large, general hospitals in Seoul,” he said. “Without a new system that regulates the number of visitors, large hospitals will remain vulnerable to hospital-to-hospital transmission as so many people would be exposed to the virus should there be an outbreak of any contagious disease.”

The government also plans to establish a new system that offers full nursing care to include assistance usually provided by patients’ family members, said Kwon. According to a recent study by the Korea Institute for Health and Social Affairs, introducing the system would require the Health Ministry to spend 4.6 trillion won ($3.95 billion) to offer full nursing services at 1,780 hospitals nationwide by 2020, and hire 47,922 more nurses to make it possible.

“We had been planning (to introduce the full nursing system) before the Mers outbreak took place,” said Kwon. “Before the outbreak, our initial plan was to have more nurses in small hospitals in regional and remote areas. But through this outbreak we learned that big hospitals in Seoul can in fact be more vulnerable to hospital-acquired infections.”

South Korea currently has the lowest patient-to-nurse ratio among the Organization for Economic Cooperation and Development nations, at 0.28 nurses per patient. The OECD average is 1.25.

To increase the number of nurses, the Health Ministry announced its plan to newly establish a two-year nursing program in universities earlier this year. Currently, there are two types of nursing certificates in Korea. One can be obtained by attending a four-year university degree program, while the other only requires a year-long certification program offered in non-university institutions. With the newly established program, there will be three types of nurses with different skills and responsibilities, including caring for inpatients, and this would eventually improve the quality of the nation’s health care, Kwon said.

The plan, however, has been fiercely opposed by the representative bodies of Korean nurses, who claim that nurses with degrees in four-year programs would likely lose their jobs once the new system gets established.

The Mers outbreak has killed 36 and infected 186 since the index case was confirmed May 20. The spread has consistently shown signs of fading, with no additional cases confirmed since July 6.

The World Health Organization states that the declaration of an end to an outbreak should be made at least 28 days after the last confirmed patient has completely recovered.

Among the 12 confirmed patients remaining in hospitals in Korea, 11 have tested negative for the virus and are currently being treated for after-effects of the disease. Of these, three are said to be in unstable condition, although the Health Ministry refused to identify them.

It is unclear when the last remaining Mers-positive patient’s condition might improve, as the patient is said to be suffering from blood cancer on top of Mers. The patient is reported to be in his or her 30s.

Also on Tuesday, the special Mers response committee at the National Assembly proposed a resolution to launch an inspection by the Board of Audit and Inspection of Korea on the Health Ministry and the Samsung Medical Center‘s handling of the outbreak during the early stages of the crisis.

The Health Ministry had refused to share the list of Mers-affected hospitals for more than two weeks after the index case was confirmed. The lack of transparency has been blamed for the public fear that eventually damaged the nation’s economy.

The ministry has also been accused of protecting commercial interests of the Mers-affected hospitals by not sharing the information, rather than keeping the general public safe from the possible infection. Almost half of all confirmed cases occurred at the Samsung Medical Centre in southern Seoul, which is still largely known as one of the top hospitals in the country.

Meanwhile, a total of seven countries, including parts of China, the Czech Republic, Russia, Vietnam and the United Arab Emirates, have all lifted their travel warnings on Korea as of Tuesday, according to the Foreign Ministry.