No pork in legacy budget–Abad

The proposed national budget of P3.002 trillion for 2016 was submitted by the Department of Budget and Management (DBM) to the House of Representatives on Tuesday, the last one of the Aquino administration.

The proposed budget for 2016, an election year, is 15 percent higher than the P2.6 trillion earmarked for this year and accounts for 19.5 percent of the gross domestic product (GDP), Abad said.

He said there was no hidden pork barrel funds in the budget, which lawmakers could use to identify their pet projects in order to get kickbacks.

“There’s no more pork in this budget,” he said.

READ: No pork barrel in 2016 budget—Drilon

“The Supreme Court has prohibited the creation of lump sums, in which after a budget is enacted, the senators or congressmen are allowed to identify where the lump sums go,” he said.

The budget secretary defined a lump sum as “one big fund without any disaggregation, with no specific projects or places identified.”

Two weeks ago, former Sen. Panfilo Lacson told certified public accountants that lump-sum or discretionary funds could still be found in the 2015 budget.

He and his team uncovered at least P424 billion in lump-sum appropriations in the 2015 General Appropriations Act (GAA), according to Lacson.

The former senator said he frowned upon discretionary funds as these were prone to misuse and corruption, citing the P10 billion in Priority Development Assistance Fund (PDAF), a pork barrel, that the government lost in the scam allegedly perpetrated by Janet Lim-Napoles in connivance with lawmakers.

The Supreme Court declared the PDAF unconstitutional in November 2013 amid public protests triggered by the PDAF scam.

Lump-sum or discretionary appropriations have been minimized to only items that cannot immediately be disaggregated, Abad said.

“Over the years, we have been trying to disaggregate and reduce the lump sums in budget in the interest of promoting greater transparency and accountability,” he said.

In the 2016 budget, he said there were only three types of lump sums: the National Disaster Risk Reduction and Management Fund, previously known as the calamity fund, amounting to P38.8 billion; the Contingency Fund, for emergency purposes, amounting to P4 billion, and the allocation for local government units.

The other lump sums are pension and guaranty funds, and miscellaneous personnel benefit funds, including productivity and enhancement incentive and performance bonuses, according to the budget secretary.

He said legislators were “of course” free to introduce projects in the budget. “That’s one of the key functions of Congress because they have power of the purse.

“They can even change projects in the GAA to reflect the needs of their constituents,” he said.

Abad submitted the five-volume National Expenditure Program (NEP) to Speaker Feliciano Belmonte Jr. and other leaders of the House and of the appropriations committee. 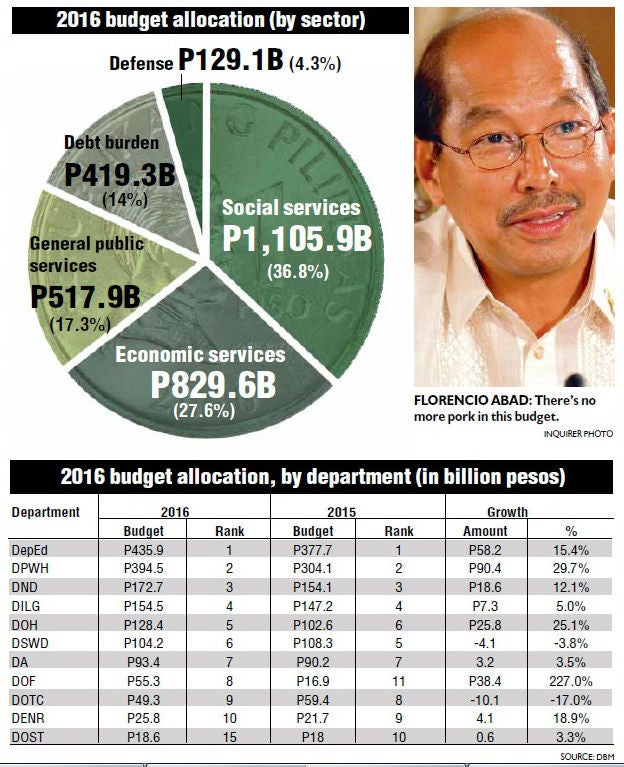 The NEP will serve as the backbone of the budget law, or the General Appropriations Act of 2016, which Congress will scrutinize, subject to debate, and attempt to pass within the year.

“What we’re trying to do with the 2016 budget is to consolidate the legacy [Aquino] has left specially in the area of finance, poverty reduction and economic expansion,” Abad told reporters after the turnover of the NEP at the House of Representatives.

Belmonte congratulated the DBM for submitting the budget bill only a day after President Aquino’s State of the Nation Address, a speed unheard of in previous administrations.

“I remember in the past we used to [receive] this more or less a month after the session [of Congress] started. This is a great improvement and a factor why the previous five budgets were approved on time,” he said.

The House appropriations committee chair, Rep. Isidro Ungab, said the body would study the proposed budget “page by page, hopefully line by line,” and try to finish it on time.

The committee will hold the first budget briefing on Aug. 10.

Abad gave his assurance that the 2016 budget would not be an “election budget,” in response to insinuations that the ruling Liberal Party might use it to push its candidates.

“The campaign period for national positions starts in February. If we’re going to use this budget all in January, that’s impossible,” he said.

He noted that this budget was almost 95 percent higher than 1.5 trillion the DBM submitted in 2010.

“This has been possible because of improvements in tax administration, the management of our liability, and the diminishing of leakages and inefficiencies coming from bottlenecks in the budget process,” he said.

Abad said this was accomplished without raising taxes, except the sin tax reforms and at the same time decreasing the country’s debt obligations.

The government deficit in 2016 is expected to amount to P309 billion, or 10.3 percent of the proposed budget, half the proportion of six years ago when the deficit accounted for 20.7 percent of expenditures.

Agencies that got the largest share of the budget were the following:

Department of the Interior and Local Government, P154.5 billion

Defense received P129.1 billion, an increase of 11.5 percent, compared with last year’s allocation. This allocation will fund the modernization of the Armed Forces of the Philippines in light of the territorial disputes in the West Philippine Sea.

The budget of the Autonomous Region in Muslim Mindanao (ARMM) rose by almost P5 billion, from P29.4 billion. ARMM’S budget for 2015 was P24 billion.

Abad said the DBM could not yet provide funding for the proposed Bangsamoro Basic Law since the measure had yet to be passed.