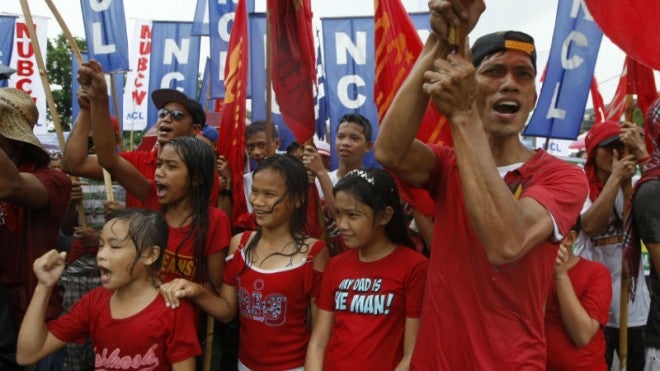 Protesters shout slogans during a rally near the House of Representatives to coincide with the last State-of-the-Nation-Address or SONA of Philippine President Benigno Aquino III at suburban Quezon city northeast of Manila, Philippines Monday, July 27, 2015. (AP Photo/Alecs Ongcal)

That was the message aired by protesting militant youth groups for President Benigno Aquino III who delivered his sixth and last State of the Nation Address (Sona) Monday .

He said that Aquino should be jailed for his involvement in the Disbursement Acceleration Program (DAP) which was rendered partly unconstitutional by the Supreme Court.

The youth leader also assailed the alleged lies peddled by Aquino in his last Sona, such as having a better state of education and declining unemployment rate.

Leaders from other militant youth groups also joined in the chorus of slamming Aquino who is just counting more than 300 days left to his presidency.

Terry Ridon of Kabataan party-list said that the President cannot fool the people and that “no magic mic can make the platitudes in his final Sona sound convincing.”

“Today, we condemn the Aquino administration for being satisfied in its mediocre programs and patting its back for fake reforms that did nothing to improve the situation of our Filipino youth,” Ridon said.

(My critics said that I am the one who has blinders who can’t see what’s good in the country. But it is them who cannot see the good things we did.)

In his parting words, Aquino said that he would let history decide on how he ruled the country.

“I have fought the good fight, I have finished the race, I have kept the faith,” the president said.