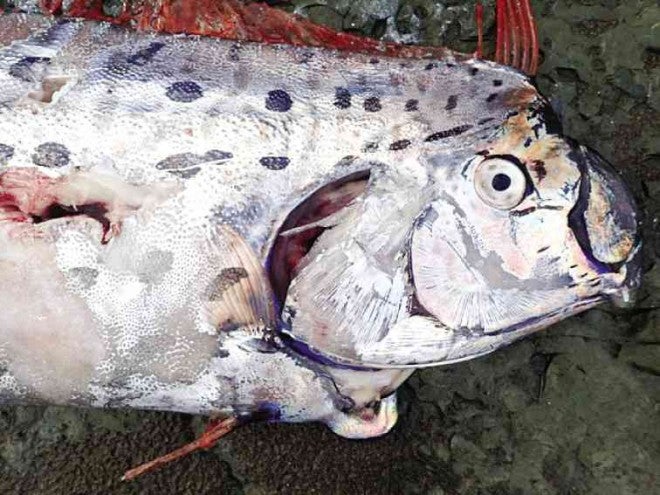 CLOSE-UP of the oarfish caught by a fisherman in Antique. Oarfish are deep-sea dwellers and scientists are still trying to find out why some oarfish swim to the surface. CONTRIBUTED PHOTO

TOBIAS FORNIER, Antique—Julie Miranda was fishing in Barangay Indalog here on Thursday when he saw a shark chasing a big fish.

Shortly after, the shark swam off and the big fish started to float.

Miranda loaded the fish onto his boat and brought it to shore.

But the fish was no ordinary find. It was a 3-meter long oarfish weighing 14 kg.

“It was our first time to see a very big and very long fish in this town. Even the old villagers do not know the local name of this fish,” said Lourdes Sarad, municipal agricultural officer of Tobias Fornier.

Oarfish, or king of herrings, was recognized by the Guinness Book of World Records as the longest bony fish to be recorded in 2015.

The longest oarfish, which was hit by a steamship, was 13.7 meters, longer than a bus.

A team of scientists in New Jersey saw in 1963 an oarfish which was about 15.2 meters long. Mature oarfish have an average length of 6 meters.

The scale-less and silvery fish is named oarfish because of their long pectoral fins, which resemble oars.

It is called the king of herrings because of their resemblance to the smaller herrings and fishes. It is also called “ribbon fish” because of its body shape and its slender, reddish fin.

What Miranda loaded onto his boat was the third oarfish caught in Antique since 2014.

Yangga recalled another oarfish had been caught also in 2014. The two oarfish said to have been caught earlier had not been measured or weighed, though.

The municipal waters of Tobias Fornier is part of the Cuyo East Passage and is known as a fish migration highway.

Dr. Romeo Caturao, dean of the College of Fisheries of the University of Antique’s Tario Lim Memorial Campus in Tibiao, Antique, said the oarfish may have been carried closer to shore by a strong ocean current. Oarfish are poor swimmers that are likely to just drift with the current. Caturao said it was possible that the shark seen by Miranda chasing the oarfish had taken advantage of this.

Oarfish is caught in game fishing but is not commercially viable as food because its gelatinous flesh is considered inedible.

Rosanmi Labnao, agricultural technician in fisheries and municipal environment and natural resources of Tobias Fornier, said the town referred the oarfish to the Bureau of Fisheries and Aquatic Resources (BFAR) to determine what kind of fish it was since it was the town’s first encounter with it.

“We were asked if the fish is edible or not,” said Labnao. “They informed us that the fish is not palatable,” he said.

Read Next
Semirara: Freebies make workers dream
EDITORS' PICK
Smart reinforces superiority with best speed and mobile video experience in PH
Every Filipino home can now be a smart home with realme TechLife
822 NPA-free barangays set to get P20-M gov’t aid — Esperon
Nestlé Philippines’ ‘NESCAFÉ Plan’ bags Grand Anvil at PRSP 56th Anvil Awards
Don’t waste the hope of vaccines, warns WHO
Violence done in the name of God ‘the greatest blasphemy’ – Pope Francis
MOST READ
Rights lawyer survives attack by playing dead, loses all case files
So: I lacked connections to succeed in PH ‘culture’
US weapons, hardware in exchange for VFA
Gerald admits being with Julia, reveals breakup with Bea through ‘too many conversations’
Don't miss out on the latest news and information.

Nicole Scherzinger on singing ‘Pangako’: I’m not the best singer, but I’m going to give you all my heart and soul