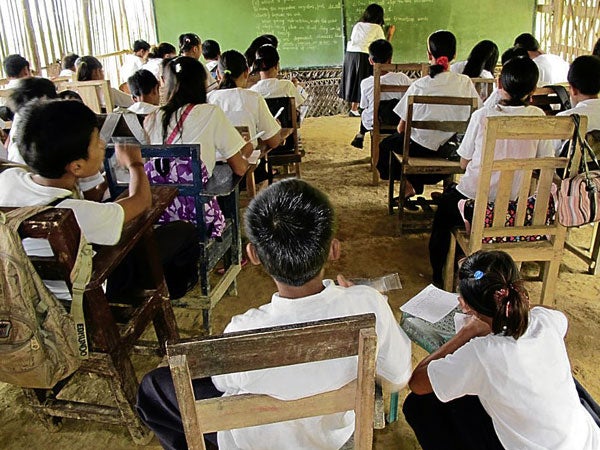 The new K to 12 (Kindergarten to Grade 12) curriculum had been implemented as of February 2014, and the first batch of high school students to go through it will graduate in March 2018. The program has been met not just with protests. There are at least five petitions in the Supreme Court against the K to 12 Law, or Republic Act No. 10533.

The Department of Education (DepEd) reported that it had constructed 86,478 classrooms as of February 2015, enough to fill the backlog of 66,800 classrooms in 2010. The DepEd also reported 1:1 student-textbook and student-school seat ratios since December 2012. Even as it copes with the annual increase in enrollment, the regular wear and tear of school equipment and resources, and the effects of natural disasters, the DepEd faces the prospect of more shortages as the K to 12 program introduces two additional years of senior high school.

In its latest report to Congress, the DepEd states that every additional year in the basic education system requires 20,000 to 28,000 public classrooms, which translates to a 40,000 to 56,000 additional classroom shortage for the two-year senior high school program. As a result, the official classroom shortage, to include the requirements for the K to 12 program, will reach more than 95,000.

In June 2015, the Department of Budget and Management (DBM) released P31.8 billion to build and rehabilitate 22,325 classrooms across the country, in line with the implementation of the K to 12 program.

The DepEd says an additional 60,000 to 82,000 teachers will be needed to implement the senior high school program. The K to 12 program also requires the printing of a minimum of 60 million textbooks since the textbooks designed for the old 10-year curriculum will now be obsolete. 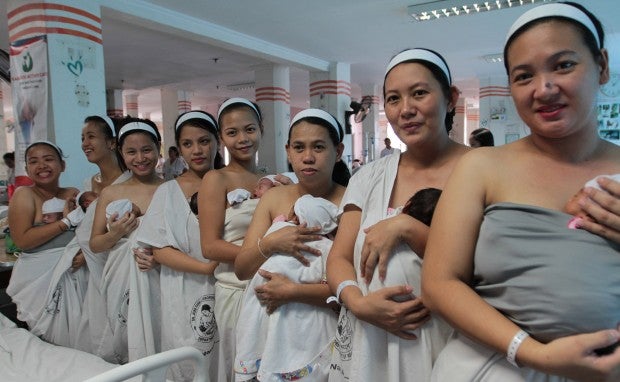 Mothers with their newly born babies show the Kangaroo mother care inside the Jose Fabella hospital during the World health Organization hospital tour with for the launching of the “Unang Yakap” in the Western Pacific Region. INQUIRER FILE PHOTO

Prompted by recent typhoons, floods and other natural disasters that left many families poor, homeless and jobless in various parts of the country, the Listahanan survey is currently being conducted for the second time, with a target of 15.3 million households. The survey, aimed at building an information management system that will pinpoint who and where the poor families are, will serve as the basis for identifying the beneficiaries of social protection programs.

In December 2014, a Commission on Audit (COA) report said the DSWD handed out more than P1 billion to about 364,000 families whose names were “missing” from the Listahanan database. There were also double payments to people whose names appeared on the list twice. The COA said P168.122 million was also given to 21,117 “nonpoor beneficiaries.”

The DSWD claimed that the problem involved only the documentation process and that the COA did not see any suspicions of misuse or misappropriation of the funds.

The Sin Tax Reform Law was signed in December 2012 and came into effect in January 2013. In the first two years of its implementation, the sin tax has generated an additional P102 billion—of which 18 percent came from taxes levied on tobacco products—to finance universal healthcare and health infrastructure programs, according to the Department of Finance.

The budget allocation for health insurance premiums for the poor increased from P12.6 billion in 2013 to P35.3 billion in 2014. Of the total registered PhilHealth members in 2014, 40.4 percent were from the indigent sector, against the 16.5 percent in 2013.

Also signed in December 2012, the Responsible Parenthood and Reproductive Health Act was stopped from being implemented by a Supreme Court’s status quo ante order just two months after it became effective on Jan. 17, 2013.

In July 2014, the high court unanimously declared the law “not unconstitutional,” but upheld its April 8 ruling that rejected eight of the law’s provisions. The provisions include those pertaining to providing minors access to contraceptives without parental consent; penalizing health-care providers for refusing or failing to disseminate information about RH programs; requiring parental consent for a minor in nonemergency situations; and penalizing public officers who refuse to support RH programs.

In a resolution issued on June 17, the high tribunal stopped the government from “procuring, selling, distributing, dispensing and administering, advertising and promoting” contraceptive implants, pending the high court’s final disposition of an appeal to permanently ban the product for its alleged “abortifacient” side effects. Sources: Inquirer archives, DBM and DepEd websites, Official Gazette website