‘Where are the missing ministers?’ | Inquirer News
Close
menu
search

‘Where are the missing ministers?’ 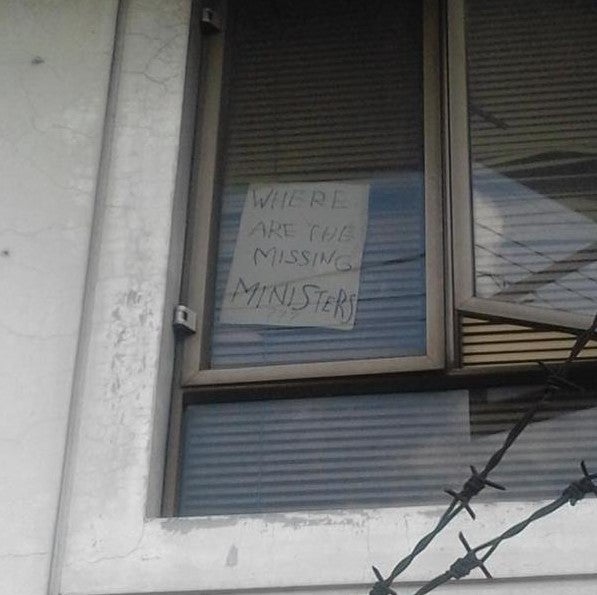 A SCRAWLED sign displayed on a glass window of a building inside the Iglesia Ni Cristo complex in Tandang Sora, Quezon City, which is supposedly home to the Manalos, asks: “Where are the missing ministers?”

This developed amid reports that some family members of Executive Minister Eduardo Manalo and at least 10 ministers have been held hostage to keep them from exposing the alleged corrupt practices in the INC.

On Thursday afternoon, INC confirmed that the mother and brother of Eduardo Manalo, executive minister of Iglesia ni Cristo, have been expelled from their church for sowing disunity.

“Masakit man sa loob ng kapatid na Eduardo Manalo ay ipinasya nila na itiwalag yung mga lumilikha ng mga pagkakabaha-bahagi sa Iglesia. Kaya sa mga pagsambang isasagawa ng Iglesia ni Cristo simula sa araw na ito, ipaalam sa lahat ng kapatid ang pasyang yun ng Tagapamahalang Pangkalahatan (Painful as it is to our brother Eduardo Manalo, they have decided to expel those who have been causing division within the Church.  That is why in future church services of the Church of Christ, from this day, the Overall Leadership will let this be known by all of our brothers),” Bienvenido Santiago, general evangelist of Iglesia, said in a press briefing.

Angel Manalo and his mother Tenny were expelled for their video uploaded on YouTube Wednesday night claiming that their lives have been placed in danger and that some ministers have been abducted.

“My brethren, of the Church of Christ, we are appealing to you because our lives are in danger. We hope that you can help us. I hope that you also listen to the appeal of my mother, Sister Tenny Manalo,” Angel said in Filipino.

Tenny, widow of Eraño Manalo who was executive minister of Iglesia for 46 years, did not appear on the video. In a voice over, she said, “I am appealing to our brethren in the church to help us because there is a threat to our lives. Please help my children, Angel and Lottie and their companions. Let us also help the ministers who were taken and until now have not yet been found.” Santiago, who faced members of the media seeking comment on the video, said the allegations were not true.

“Meron pang alegasyon na dinukot na ministro. Ibig na palabasin na may kinalaman ang Iglesia. Wala pong katotohanan, hindi po totoo yun (There is even an allegation that a minister was abducted.  They want to make it appear that the Iglesia has something to do with it.  There is no truth to that claim.  That is not true),” Santiago said.

“Ang basa namin doon sa pinahayag nila kagabi sa YouTube ay ibig lamang nilang makakuha ng mga taong magsisimpatya sa kanila. Para sa ganon ay makuha nila ang talagang gusto nila na mapakialaman ang pamamahala sa Iglesia (Our reading of their statement on You Tube is they want to get people to sympathize with them.  This so they could get to interfere in the management of the Iglesia),” Santiago said.

It was clear that the mother and son were sowing disunity in the church so the rules must be applied to them, Santiago said. With a report from Erika Sauler, Philippine Daily Inquirer