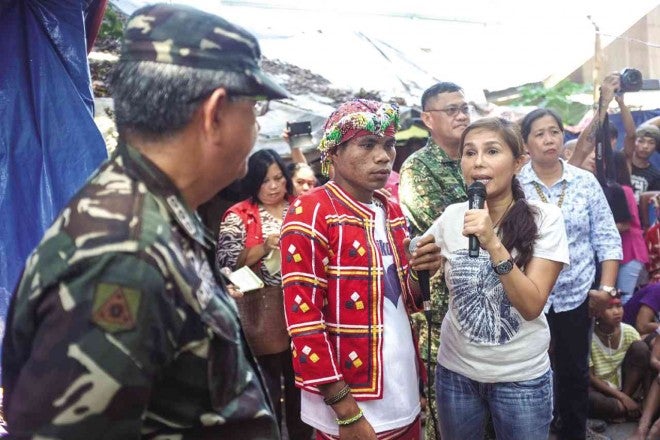 Cotabato Representative Nancy Catamco speaks at a dialogue with lumad and military officials over the indigenous people’s fear of returning to their homes because of alleged militarization. KARLOS MANLUPIG/INQUIRER MINDANAO

DAVAO CITY, Philippines –Several lumad from Talaingod, Davao del Norte, and nearby areas were hurt when anti-riot policemen stormed the Haran House operated by the United Church of Christ of the Philippines here.

The lumad, or indigenous people in Mindanao, had sought refuge at the center after fleeing the alleged militarization of their villages early this year.

Police stormed the place after Cotabato Representative Nancy Catamco ordered them to haul the evacuees into waiting vehicles so that they could be sent home to their villages.

The lumad, numbering about 700, had defied Catamco’s call on them to return because they said soldiers, whom they accused of harassment, were still in their villages.

Catamco’s effort to forcibly send the evacuees home was only halted when Davao City Vice Mayor Paolo Duterte stepped in and conducted a dialogue with the police and the lumad.