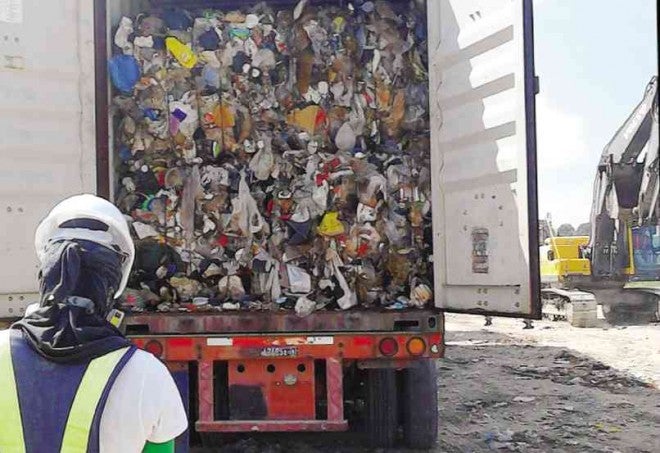 A CONTAINER van packed with trash illegally shipped from Canada in 2013 is unloaded at the sanitary landfill of the Metro Clark Waste Management Corp. in Capas, Tarlac. PHOTO COURTESY OF MCWMC

IT’S NOT difficult to find the sanitary landfill called Kalangitan, a Filipino word that connotes “heaven.” “Just follow the stench,” a tricycle driver instructed as rain pummeled Bamban town in Tarlac on Thursday.

After a concrete, winding road that stretches 7 kilometers from the junction near the Bamban town hall, a dirt road leads to the Kalangitan landfill—so named for being built on the rolling hills of Sitio Kalangitan in Barangay Cutcut II in Bamban’s neighboring town of Capas.

“Basura ng Canada, Ibalik sa kanila!” a tarpaulin of the Kakuka Youth Organization Inc. screamed at the junction. It echoes the demand of the EcoWaste Coalition since 2013 when the Bureau of Customs (BOC) seized 55 container vans declared by the importer, Jim Makris, to be filled with “scrap materials” from Ontario, Canada.

The demand went unheeded. On the order of a Regional Trial Court in Manila that favored the petition of the shipper, Zim, through its local agent, Le Soleil, to recover the containers, BOC in May contracted the operator of the landfill, Metro Clark Waste Management Corp. (MCWMC), to bury the Canadian trash.

BOC used the waste analysis and characterization study (WACS) of the Environmental Management Bureau (EMB) of the Department of Environment and Natural Resources to justify the disposal of what it called “municipal solid wastes.”

What was supposed to be a “case closed” for Customs Commissioner Alberto Lina raged on.

Four days after the Inquirer broke the story on July 9 when 26 container vans had already been emptied and buried, Tarlac Gov. Victor Yap called on MCWMC to stop the disposal process. Ahead of the July 16 public hearing of the Tarlac provincial board, policemen went to Kalangitan and stopped the dumping of eight container vans of Canadian trash.

When it was the turn of Tarlac Vice Gov. Enrique Cojuangco Jr. and the provincial board to question MCWMC president Rufo Colayco, the latter announced he was canceling the contract by committing to send back to BOC the eight container vans delivered on July 15. MCWMC, Colayco said, would not accept the remaining container vans.

“I recognized that Tarlac absolutely rejects any foreign-sourced garbage, toxic or otherwise,” he said.

A “travesty” was how Cojuangco called the dumping that was not coordinated by BOC or MCWMC with the provincial government.

As of Monday, the provincial government had not sued MCWMC for violating Resolution No. 108-2003. Adopted at the request of the MCWMC, this resolution allowed MCWMC and the landfill proponent, Clark Development Corp. (CDC), to accept garbage from cities and towns outside of Tarlac and Clark Special Economic Zone (now Clark Freeport).

Colayco regretted having agreed to Lina’s request to bury the garbage. The P1-million contract sullied the reputation of the firm, he said.

“MCWMC has been unfairly made to appear as if we accepted toxic waste. This is not true. We are scrupulously careful not to do that. The issue at hand is that Tarlac absolutely rejects foreign-sourced trash, not that this batch is toxic,” he said.

Holger Holst, MCWMC vice chair, said the wastes from Canada were “not common household wastes.” The shipment was declared as “recycled plastics.”

“After inspection during unloading, it is clear to us that these materials were supposed to be recycling material for a plastic manufacturer. However, the recycling efforts were insufficient, the materials were far too dirty and had still a little amount of ‘common’ waste included so that it is actually not usable for the purpose … there were no diapers or other earlier mentioned stuff in it,” Holst said.

EMB recommended to ship back the wastes, a move that the national government backed out from ahead of President Aquino’s state visit to Canada in May this year.

A citizen from Canada posted this on MCWMC website on July 15: “1) The Canadian government has imposed its problem on another country. 2) The Philippines backed down from an important fight. You can spin this any way you want but, in the end, someone else came to your house and sh*t on your floor. The Philippines should grow some balls and send all that sh*t back to Canada. Send it bottle by bottle, scrap by scrap, to Canadian Parliament.”

EcoWaste Coalition’s Aileen Lucero finds it “grossly unfair” for any community to serve as an “unwilling burial site” for Canada’s trash for the sake of diplomatic and political relations.

“We are not a global dump for imported rejects, scraps and wastes,” she said.

Canada, Lucero said, has enormous financial and technical resources at its command to get back the wastes, a matter it was not doing because the deal was between private firms.

Cojuangco has vowed to bring the matter to the Senate for investigation. He clarified, however, that the aim of the probe was not to close the Kalangitan landfill.

The nine resolutions and an ordinance issued by the board since 2000 represented a cycle of objection, acceptance, setting conditions, demanding taxes as well as shares from tipping fee and closure in 2008.

Local governments did not have a unified stand.

While it disposed of its waste at the landfill, Capas barred trucks from passing the route to press MCWMC to pay a 2-percent share of the town from gross income earned by Clark-based firms and to build an access road it promised in 2002.

On the other hand, Bamban allowed trucks to pass through its roads because the rest of Tarlac would stink if the province’s 18 towns did not throw their garbage in Kalangitan.

As politicians tie themselves to these issues and while aghast at the dumping of foreign wastes in their backyard, citizens like Diana Figueroa bring to fore public health hazards, for instance, the dumping of untreated hospital wastes and unsegregated garbage from local governments.

“Our fight to have the Kalangitan landfill closed has been going on for more than a decade now. I hope those opposing the dumping of Canadian wastes in Kalangitan could support the local issues in this national battle,” Figueroa said.