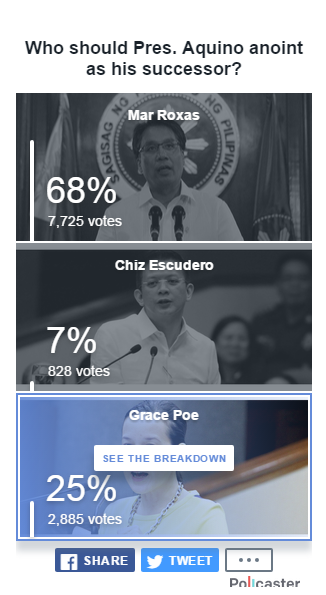 President Benigno Aquino III may be agonizing over whom to endorse in the 2016 elections, but INQUIRER.net readers have already made their choice on who they think he should anoint as the administration’s presidential candidate.

An online poll conducted by INQUIRER.net showed that a dominating 68 percent of respondents, equivalent to 7,725 votes of 11,438, thought Interior Secretary Manuel “Mar” Roxas II should be the standard-bearer of the ruling Liberal Party next year.

Sen. Grace Poe, who topped recent surveys as the most preferred presidential candidate in 2016, came in second with 25 percent, or 2,885 votes.

Poe has previously expressed her preference to run with Escudero, but the two, as well as Roxas, have yet to announce whether they would seek higher posts in 2016.

Roxas and the two senators met with Aquino in a Palace dinner last week, but failed to come up with an agreement.

Poe confirmed that she met with the President for the third time on Monday afternoon for five hours, saying she sensed the “very difficult position” that Aquino was in.

Read Next
MRT technical glitch disrupts operations
EDITORS' PICK
Climate Change Commission and Nestlé PH to discover sustainability-focused solutions
NCR’s COVID-9 alert level may be downgraded from 3 to 2 soon — DOH
Gordon calls 2 Pharmally execs ‘Senate fugitives’ after no-show in probe
Legarda emphasizes role of ICC/IPs in nation building this IP month
Isko Moreno bares ‘two-pronged’ approach to rehabilitate MSMEs
What’s at stake for every fighter at ONE: NextGen
MOST READ
LJ Reyes says Paolo Contis made ‘no efforts’ to talk to her after their split
Despite being called arrogant, Yang says he ‘loves’ PH and ‘loves doing business here’
PDP-Laban Cusi wing Senate bets willing to give way to Duterte
Drivers with no traffic violations can now renew licenses for 10 years
Don't miss out on the latest news and information.