Teams on the Thames count the monarch’s swans 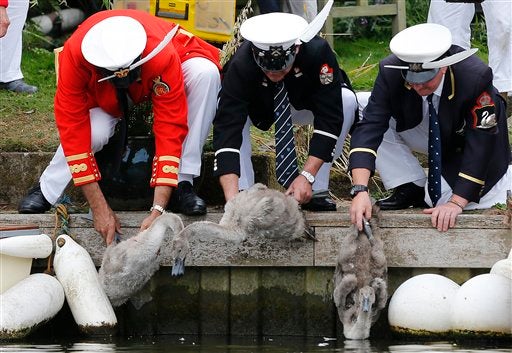 CAPTION CORRECTS THE JOB TITLE – Queen’s Swan Uppers put the swans back in the water during the annual count of the Queen’s swans on the river Thames in Middlesex in Staines on Thames, England, Monday, July 20, 2015.(AP Photo/Frank Augstein)

STAINES, England—Teams of census-takers took to the River Thames on Monday for the colorful annual count of Queen Elizabeth II’s swans — a blend of science and ceremony that dates to the 12th century.

By tradition, the monarch owns all the swans found in Britain’s open waters, and the event assesses their overall well-being.

The queen, who counts Seigneur of the Swans among her many titles, only exercises her ownership rights on certain stretches of the Thames.

When a brood of young swans is spotted, a boatman cries “all up” and others round up the family of birds and take them out of the muddy river.

Wardens, zoologists and boatmen then count, measure, weigh and ring the swans in order to safeguard the population and determine its health.

The queen deploys her envoys down the river for five days to see how her swans have fared from potential threats like minks, fish hooks and hooligans using air guns.

Barber, who has led the swan upping expedition for 22 years, said the increase of vandalism is to blame.

“This last year we had more shootings than we ever had in the Windsor area, which is very disastrous for us,” he said.

“These senseless shootings cause horrific injuries and often death, with the injured swans and cygnets sometimes taking days or even weeks to die if they are not discovered soon after being shot.”