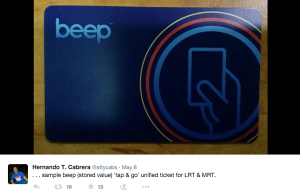 The first day of the limited, public trial of the tap-and load-card, called “Beep card,” was a success, the Department of Transportation and Communication (DOTC) said Tuesday.

“The response we got from commuters was very positive,” Transportation Secretary Joseph Emilio Abaya said in a statement, referring to Monday’s pilot testing of the Beep card at the Legarda station of the Light Rail Transit 2 (LRT-2).

Abaya acknowledged minor glitches but said those were expected considering the system was still being tested.

Among the glitches, he said, were the rejection of old and crumpled peso bills by ticket vending machines.

Abaya said “No major issues were experienced at the new turnstiles.”

He assured the public that the project concessionaire AF Payments, Inc. (AFPI) would “work on the glitches, as the new system is refined further throughout this limited public trial stage.”

“The turnout was good. A good number tried it,” Chaneco said in a text message to INQUIRER.net.

Abaya said the DOTC was aiming at expanding the new ticketing system to other stations of the LRT-2 within the next two weeks.

“Our target is to activate the system at all 11 stations of LRT-2 in about three weeks’ time. So we have 2 weeks to work on the 10 remaining stations and to address the minor glitches encountered. As always, we look forward to receiving more feedback from passengers,” Abaya said.

Currently, commuters may buy their single-journey or stored value tickets only at the Legarda station.

Commuters with single-journey tickets may enter only at the Legarda station but may exit at any of the other stations.

Single journey and stored value magnetic tickets may still be bought at the Legarda station and used throughout the system.

Personnel of the DOTC, LRT, and AFPI have been deployed to LRT-2 stations to help commuters get familiarized with the new ticketing system.