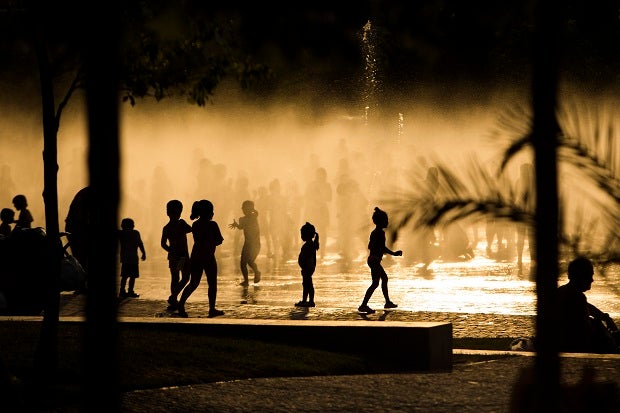 In this June 29, 2015, file photo, children play as they cool down in a fountain beside the Manzanares river in Madrid, Spain. June was warm nearly all over, with exceptional heat in Spain, Austria, parts of Asia, Australia and South America. Pakistan reported a June heat wave that killed more than 1,200 people, which according to an international database would be the 8th deadliest in the world since 1900. AP

WASHINGTON, United States — Earth dialed the heat up in June, smashing warm temperature records for both the month and the first half of the year.

Off-the-charts heat is “getting to be a monthly thing,” said Jessica Blunden, a climate scientist for the National Oceanic and Atmospheric Administration. June was the fourth month of 2015 that set a record, she said.

“There is almost no way that 2015 isn’t going to be the warmest on record,” she added.

NOAA calculated that the world’s average temperature in June hit 61.48 degrees Fahrenheit (16.33 Celsius), breaking the old record set last year by 0.22 degrees (.12 degrees Celsius). Usually temperature records are broken by one or two one-hundredths of a degree, not nearly a quarter of a degree, Blunden said.

And the picture is even more dramatic when the half-year is considered.

The old record for the first half of the year was set in 2010, the last time there was an El Nino — a warming of the central Pacific Ocean that changes weather worldwide. But in 2010, the El Nino petered out. This year, forecasters are predicting this El Nino will get stronger, not weaker.

“If that happens, it’s just going to go off the charts,” Blunden said.

June was warm nearly all over the world, with exceptional heat in Spain, Austria, parts of Asia, Australia and South America. Southern Pakistan had a June heat wave that killed more than 1,200 people — which, according to an international database, would be the eighth deadliest in the world since 1900. In May, a heat wave in India claimed more than 2,000 lives and ranked as the fifth deadliest on record.

May and March also broke monthly heat records, which go back 136 years. Initially NOAA figured February 2015 was only the second hottest February on record, but new data came in that made it too the hottest, Blunden said. Earth has broken monthly heat records 25 times since the year 2000, but hasn’t broken a monthly cold record since 1916.

“This is what anthropogenic global warming looks like, just hotter and hotter,” said Jonathan Overpeck, co-director of the Institute of the Environment at the University of Arizona.