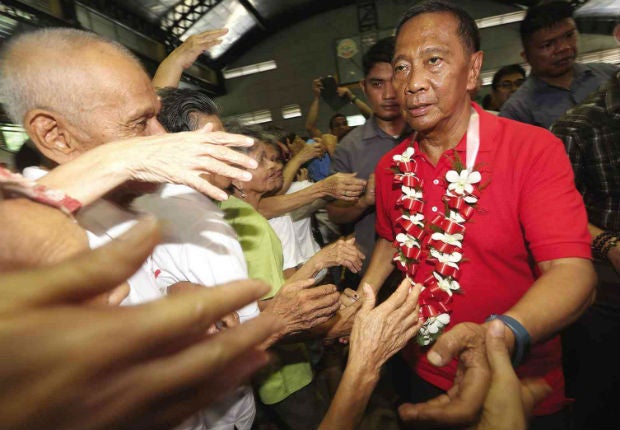 Vice President Jejomar Binay is not engaged in premature campaigning but is just making visits around the country as part of his promise to the people to listen to their problems and try to do something about them.

“The Vice President has made it clear his provincial visits are part of his commitment to be with the people, listen to their pleas and find effective solutions to their problems, particularly the issues of poverty and unemployment,” Binay’s political spokesman, lawyer Rico Quicho, said on Sunday.

The Binay camp was reacting to accusations by Negros Occidental Gov. Alfredo Marañon Jr. that the vice president was on campaign mode after the latter visited his province for three days last week.

In a statement, Quicho assailed Marañon and the ruling Liberal Party for condemning their political opponents, “while ignoring the actions of their allies and party mates.”

Quicho reminded them there were LP members with plans to run for office in 2016 but who continued to use their offices and government resources as “their personal campaign kitty.”

“They must heed the call of the people to resign and to stop using government funds for their political ambition. Their spending must be subjected to scrutiny and accounting,” he said.

On Friday, Marañon had a message for Binay: You will not win in my province should you run for president next year.

“Negrenses do not need Viagra. Maybe it is only Binay who needs Viagra,” Marañon said, in reaction to a recent speech by Binay where he promised senior citizens a supply of the male potency drug should he become president.

Binay was on a three-day sortie in Negros Occidental that began Thursday.

Taking a dig at a potential rival for the presidency, Binay said he didn’t believe Negros Occidental was solidly behind Interior Secretary Mar Roxas, whose family has roots in the province and who has received the endorsement of most provincial officials.–Christine O. Avendaño; Carla P. Gomez, Inquirer Visayas