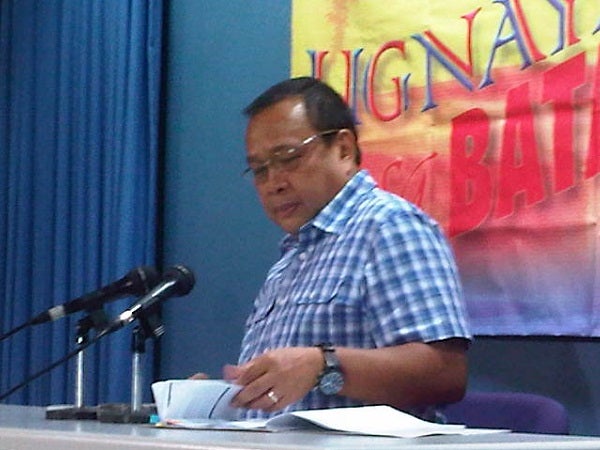 President Aquino is holding back on naming his preferred successor because he is afraid his allies in the administration coalition and even members of the Liberal Party (LP) will not back his chosen candidate.

Speaking in a radio interview on Sunday, House Majority Leader Neptali Gonzales II said the President wanted to keep the coalition intact, but he knew that whoever he chose would not be readily acceptable to the coalition partners.

“I don’t want to second-guess him, but based on his pronouncement that he is considering not only his leadership in the LP but also [the unity of the coalition], I would suppose that this [is] important to him,” Gonzales told dzBB.

“This is what is probably delaying his decision—how to be sure that when he [announces] his choice, it will have the support not only of the Liberal Party but also of the coalition partners. That is the problem. This means the President’s decision to endorse anybody will not be necessarily acceptable,” he said.

The President has had several meetings with Senators Grace Poe and Francis Escudero and Interior Secretary Mar Roxas, but the meetings have not resulted in a choice of administration candidate in next year’s presidential election.

Gonzales said the President could have made a decision sooner if the sole consideration was the LP because “it has only one candidate (Roxas), nobody else.”

He said Poe and Escudero were not LP members, but they ran as members of Team P-Noy in 2013.

Speaker Feliciano Belmonte Jr., a vice chair of the LP, advised the President to hold consultations not only with the candidates but also with the coalition partners to get an idea of who they supported.

“But his final choice should be his biggest concern,” said Belmonte, who earlier warned that unless Roxas improved his poll ratings, Poe would be “unstoppable.”

Poe, who topped the 2013 senatorial election, is the new front-runner in the voter preference polls for the 2016 race for Malacañang.

Roxas, the presumptive standard-bearer of the LP, is trailing Vice President Jejomar Binay, in the Social Weather Stations poll, and even Davao City Mayor Rodrigo Duterte, in the Pulse Asia survey.

On July 3, Sen. Cynthia Villar declared that the NP would not bankroll the campaign of Senators Ferdinand Marcos Jr., Antonio Trillanes IV and Alan Peter Cayetano, NP members who figured prominently in the survey of preferred candidates for President and Vice President, if they decide to run.

With the major candidates in 2016 likely to come from the LP, the United Nationalist Alliance and the NP, Gonzales said he had no idea whether Roxas or Poe and Escudero would be acceptable to the coalition partners or whether the President had also consulted with other coalition partners.

“I’m not trying to second-guess the President. For all we know, he has [already] talked to them (coalition partners). The President, by this time, has a very high political maturity, and I’m sure he is not alone in making this decision. As to what he is doing or who he is talking to, I don’t know,” Gonzales said.

He stressed that he was just “thinking out loud” and that his views were his own, as he was not part of the LP selection process.

He said a presidential endorsement would be a “positive” for any candidate, “but as to whether or not it will be enough to propel one to victory, that’s another question.”

Gonzales said the LP itself was unsure whether it would unite behind the President’s chosen candidate.

“If the President endorsed Mar, we’re not sure if that is acceptable. We also do not know if Grace and Chiz have their own political supporters,” Gonzales said, using Escudero’s nickname.

He agreed with the President’s concern that the administration coalition should stay united because this was the best way to ensure victory against Binay.

“The Vice President will be happy if three or more will run (for President). He has a bigger chance in a three-way fight than a one-on-one fight,” Gonzales said.

He also noted that Poe’s current lead over Binay in the polls is not insurmountable.

Unless Poe’s rating doubles to reach close to 70 percent, Malacañang remains up for grabs in the 2016 elections, he said.

Budget Secretary Florencio Abad, an LP stalwart, said he was confident the administration could put up a complete lineup of candidates, “from President down.”–Gil Cabacungan with a report from Jerry E. Esplanada

Aquino still mum on anointed one