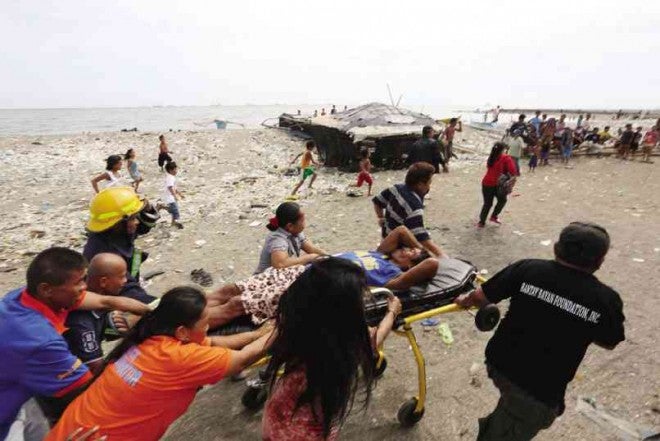 Despite a mix-up that resulted in some confusion among volunteers and a flat tire that temporarily delayed the evacuation of “victims,” disaster management officials said Sunday that the largest barangay (village) in the City of Manila was ready to respond to storm surges.

On Sunday afternoon, officials of Barangay 649—commonly known as the Baseco Compound in Manila—together with about 200 rescue volunteers, firemen and policemen, staged an emergency drill for flooding and storm surges in cooperation with the Department of Science and Technology (DOST); Philippine Atmospheric, Geophysical and Astronomical Services Administration (Pagasa), and the Manila Disaster Risk Reduction and Management Office (MDRRMO).

Science  Secretary Mario Montejo, who witnessed the start of the activity, explained that Baseco was the ideal venue for the storm surge drill, being a densely populated barangay facing Manila Bay.

“One of the biggest environmental dangers facing Baseco is the threat of storm surges or huge waves inundating the land in times of storms. Times are different now and we can’t say this will not happen in our community because the storms coming to our country are becoming stronger and stronger,” Montejo said.

“We do not aim to scare the people but to prepare them to save themselves and their families during storm surges,” he added.

For his part, Rey Compañero, the vice chair of Baseco’s Barangay Disaster Risk Reduction and Management Committee, echoed Montejo’s statements, saying that the barangay, with a population of about 46,000, has always been in danger of being submerged in floodwaters during the rainy season.

“Many areas in Baseco become flooded even if there is no typhoon, like during strong monsoon rains, we experience knee-deep floods. If there are storm surges, we have waist-deep floods. So getting people out of their homes and into the safety of the evacuation centers before worse comes to worst is a priority for us,” he said.

The drill started at 2 p.m. when the volunteers were told to go to the barangay hall to wait for the supposed Pagasa advisory on an oncoming signal No. 1 typhoon.

When the advisories came, however, the barangay officials who were meant to relay orders to rescuers got confused as to whether it was a second bulletin advisory or whether the typhoon alert level had been raised to signal No. 2. Then, the fire truck that was supposed to transport the volunteers who were to evacuate the residents suffered a flat tire.

Eventually, the rescue parties were able to enforce the preemptive evacuation. Residents along the coastal area were told to go to the evacuation center  while the ambulances transported those who could not go to the center. One woman who was loaded on the back of a fire truck almost slipped as she was being hoisted up by the volunteers.

“There were some issues such as volunteers without personal protective equipment and the lack of command posts,” said Gerardo Toledo Jr., the MDRRMO officer who witnessed the exercise.

“However, I would say they passed the drill with a score of 85 percent. They are ready to respond to flooding and storm surges,” he added.

For his part, Compañero said that the barangay residents would use what they learned from the exercise to strengthen their disaster response.