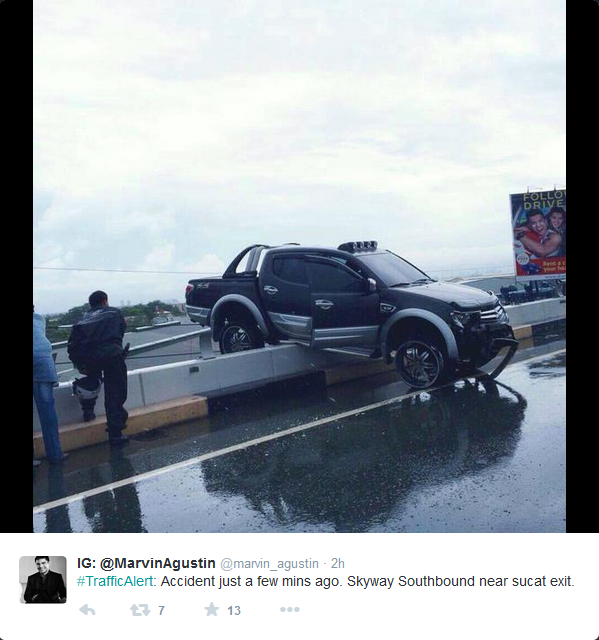 Another Skyway accident over the weekend raised concerns over safety standards implemented on the expressway.

More than a week after half of a Mitsubishi Strada pickup hanged over the edge of the Skyway near the Bicutan exit, a sports utility vehicle plunged more than 10 meters near the same spot of the main expressway and fell on a concrete wall along the East Service Road in Taguig City on Saturday night.

According to the Highway Patrol Group (HPG) public information officer, Supt. Oliver Tanseco, the accident happened at 8:47 p.m. along the northbound lane of the elevated Skyway in front of the Technological University of the Philippines (TUP).

Tanseco said the driver of the SUV with conduction sticker No. NH 5966 was identified as Mohammad Younus, a Pakistani residing in Parañaque City. Younus reportedly suffered injuries and was rushed to the nearby Taguig-Pateros District Hospital.

He added that the vehicle was speeding along the Skyway and the driver lost control of his vehicle causing him to hit the rail before falling off the highway.

This was confirmed by another driver who posted on the Facebook page of the automobile magazine Top Gear Philippines that the vehicle she was driving was in front of the Montero at around 8:40 p.m.

“I was driving at 100 kilometers per hour when I saw from my rear-view mirror an SUV cruising at a tremendous speed on my right side. I can tell that it was traveling around 160 kilometers per hour,” she added noting that it only took about five seconds for the Montero to sway four times before it turned right and hit the railing of the highway.

The Skyway management has not released a statement or answer questions about the accident as they always try to pass calls and inquiries about accidents to the HPG, which is tasked to investigate the accident.

The public has expressed concern that the Skyway’s safety barrier may not be high enough.

Ricardo Ramos, executive director of the Citizens Infrastructure Integrity Watchdog (Infrawatch) said that the safety barriers, a combination of concrete and metal, were “too low” at one meter, which was personally measured by Ramos.

He said their group thought that the barrier should at least measure 1.5 meters so that in the event of accidents involving big vehicles like SUVs and buses, these barriers would prevent them from falling from the Skyway.

“We carefully studied those barriers and they do not follow international standards as earlier claimed. In fact, they do not even have a standard to begin with,” Ramos added.

At the present height of the barriers, they are just as tall as the tires of buses, which would really not help if big vehicles figure in accidents on the Skyway, according to Ramos.

It added that by this time and with the accidents happening on the Skyway, its management should have conducted “an authoritative test” to simulate the accidents.

“As they say: Once is an accident; twice is coincidence; thrice is a trend. More than thrice is, well, sheer negligence,” Top Gear added.

On July 8, torrential monsoon rains and high-speed driving were also blamed for the Strada accident on the soutbound direction of the Skyway where the driver and a passenger were saved from falling a few meters from the elevated expressway. But two years ago, 21 passengers of a Don Mariano Transit bus were not as lucky as they were killed after the public utility vehicle plunged to the service road below it.