Mamasapano: Dream of progress within reach 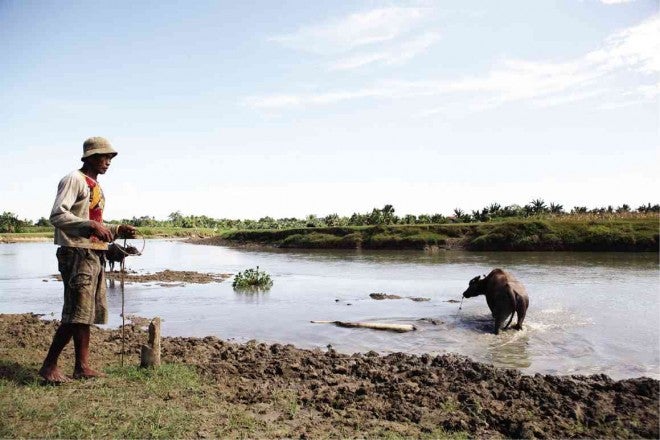 A FARMER sends his carabao to graze on the site of a gun battle between Moro guerrillas and Special Action Force commandos in Mamasapano town, Maguindanao province, where 44 commandos died, many after making their last mobile phone calls to their families. JEOFFREY MAITEM/INQUIRER MINDANAO FILE PH OTO

MAMASAPANO, Maguindanao—A dream is turning into reality in this strife-torn town.

Efforts to turn the town into a model community of long-term development are being exerted, according to a senior executive of the Philippine Economic Zone Authority (Peza).

Returning home after 50 years, Datu Sansaluna Pinagayao, Peza administrator for the Visayas and Mindanao, disclosed this in a meeting last month with Mamasapano residents in Cotabato City.

Pinagayao told residents they could rise on their feet from the clutches of poverty caused by decades of armed conflict.

He said resources would be mobilized soon in support of people’s efforts to rebuild local communities and turn these into a microeconomic zone for agriculture.

Swearing he neither has political agenda nor ulterior motive, Pinagayao said he would invite professionals and groups of experts to help establish ties with corporations as the first step to build partnerships for massive agricultural development in the town.

Dr. Pendatun Pangadil, a community development executive of a nongovernment organization, said the conferment of royal titles was not only “in deference to our great ancestors,” but was also the residents’ way of recognizing Pinagayao’s efforts in “helping Christian families in a state of crisis, as a Muslim working in their community.”

Datu Pendatun Alim, a cousin of Pinagayao’s at the Bureau of Customs, said he believed Pinagayao could do so much to help bring progress to the impoverished community of their origin.

Pinagayao, now 64, left Barangay Pidsandawan here 50 years ago when he was Grade 4 at the Barangay Linantangan Elementary School.

Alim said Pinagayao worked his way to being able to share his expertise in economics and business management through forums as senior market analyst and as trade director.

Pinagayao had introduced innovations to corporate farming in California, where he established the Gayao Agri-Ventures, and later, its branches in Cebu, Tarlac, and Carmen, Davao del Norte, Alim said.