US Pacific Fleet commander in PH for 4-day visit 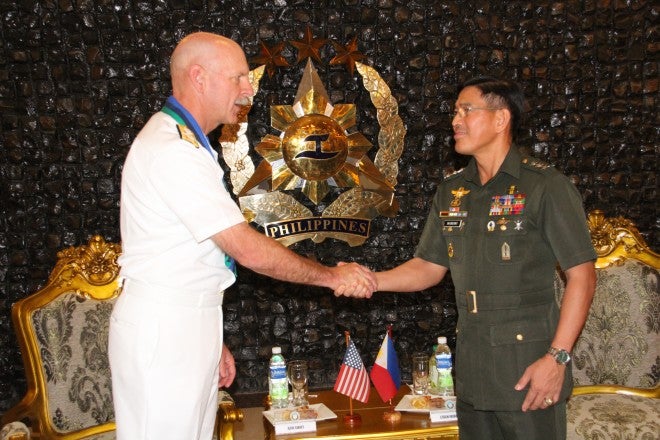 The commander of the US Pacific Fleet is in the Philippines for a four-day visit amid increasing tensions in the West Philippine Sea (South China Sea).

With only six weeks in office, Adm. Scott Swift makes the Philippines his first stop in his visit around the Asia Pacific. He will be in the country from July 16 to 19.

“He mentioned that he intentionally made the Philippines his first stop to reiterate the importance of PH-US alliance,” AFP public affairs office chief Lt. Col. Noel Detoyato said.

Swift was given full military honors and talked with the AFP chief for about 30 minutes.

“For almost half an hour the two military leaders engaged in friendly banter and had frank exchanges on various security topics,” Detoyato said.

Detoyato did not directly say whether the West Philippine Sea was discussed but said that “both leaders also shared that a move for more multilateral military activities would be a positive step and should be explored further to contribute in ensuring greater stability and security in the region.”

Swift also said he was “very grateful” to be accommodated at a short notice because Friday was a holiday, Detoyato said.

On Thursday, the US official met with Navy chief Vice Adm. Jesus Millan at the Navy headquarters in Roxas Boulevard.

The US has repeatedly emphasized that it does not take any sides to the sea dispute. The Philippines is one of the claimants of the West Philippine Sea, along with other nations Vietnam, Taiwan, Brunei and Malaysia.

China claims most parts of the sea and has been building artificial islands around the disputed sea in recent months.

The US Pacific Fleet holds jurisdiction of the maritime interests of the US in the Asia Pacific.