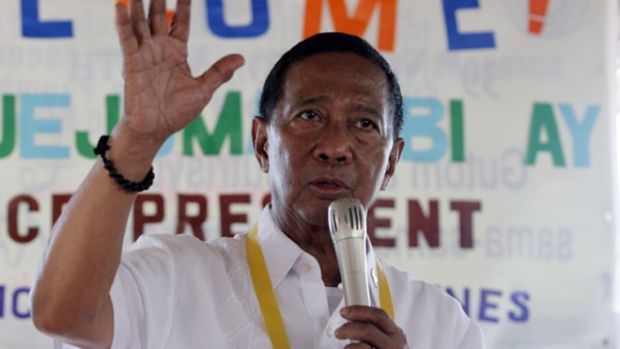 BACOLOD CITY — Vice President Jejomar Binay kept a crowd of about 100 mostly female senior citizens amused as he promised things from false teeth, male diapers to Viagra during a talk at the fish port in Sitio Sibucao in Barangay Banago, Bacolod, before noon Thursday.
Binay was accompanied by Alma Moreno, chair of the Councilors League of the Philippines; lawyer Harry Roque and former Rep. Danilo Suarez.
He told the crowd that he would replicate what he did for the people of Makati City once elected president.
After his speech, he joined the crowd waving red white and blue flaglets, mostly in yellow t-shirts, in eating lunch — boodle-fight style — before driving to Robinsons Mall to shake hands with mall goers who stopped for selfies.
The Vice President is scheduled to make similar sorties in Bacolod City during his three-day stay in Negros Occidental which is widely perceived as Mar Roxas Country.