For UPLB grad, being a ‘mama’s boy’ is least of his concerns | Inquirer News

For UPLB grad, being a ‘mama’s boy’ is least of his concerns 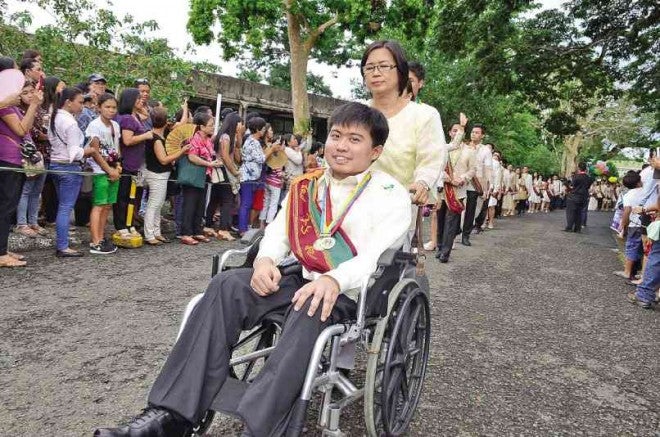 The case of Carl Adrian Castueras and his mother Mayette may be among the few and rare examples of a “mama’s boy” telling a rather heartening and inspiring story.

Carl Adrian, or Ady, was born with Duchenne Muscular Dystrophy, a rare condition of muscular degeneration affecting mostly male children. He had a hard time walking or standing on his own while growing up.

“He would fall, even without hitting anything, or had to walk on his toes,” Mayette, 52, recalled.

The condition manifested “gradually,” but Ady’s parents had known something was not right about their second child. When the boy was 8 years old, doctors advised them that he start using a wheelchair.

“I was never outgoing but before the wheelchair, I still always tried my best (to walk),” he recalled. “It was when I was told to use a wheelchair that I realized that this (condition) was different; that there were things, like going to some place, that were difficult for me to do.”

Mayette had long given up a career in marketing to become a full-time mom to Ady and her two other children. Her husband, Andrew, 53, works as an engineer in a company in Batangas City.

After finishing high school in a private school in Batangas City, Ady was determined to pursue college in UPLB. He could have gone to college in Batangas, but the family wanted him to feel normal about school and be “socially exposed,” his mother said.

“It’s a family decision. At the back of our minds, ‘Ady thought he could do it so let’s work it out,’” Mayette said. Besides, his eldest sister was also in UPLB, taking up electrical engineering at the time.

The family had to make a lot of adjustments. For one, Mayette moved in with Ady and his sister in a small apartment inside the campus. For the last four years, they would go home to Batangas only during weekends to be with Andrew and Ady’s youngest brother, who was still in high school.

“Well, it’s exhausting,” Mayette said, “but there’s nothing else we could have done because it was our choice.”

She quipped that she, too, became Ady’s “driver and alalay (nanny),” driving her son to his classes, sometimes buildings apart, and pushing his wheelchair through corridors to his classroom.

When Ady had classes on the second or third floors of the buildings, Mayette had an extra wheelchair waiting upstairs. The family hired a male helper to carry Ady and was grateful to the “kuya” or the school’s utility personnel for helping lift Ady.

“We were joking that (the family’s SUV) should also wear a sablay (UPLB’s graduation sash) for being with us all these years,” Mayette said.

Ady did not mind being seen with his mother waiting outside his classroom. In fact, when there were vacant seats, the teachers would even allow “mommy” Mayette, a Statistics graduate of UP Diliman in Quezon City, to sit in.

“I had some sort of a review, especially of my math. Some people told me that I should have enrolled, but if I did, that would mean having responsibilities of taking exams, too,” she said.

She became friends with her son’s friends, who fondly called her “Tita.”

Mayette and Ady had become popular around campus. In some instances, people stared at them, but Mayette believed those looks were more of “wondering” how mother and son managed the situation.

Several times, strangers approached them just to say how “inspiring” they were. “It’s rather inspiring for people who realize (Mayette’s) efforts to accompany me,” Ady said.

The family is scheduled to fly to Singapore this month, where Andrew has a brief work assignment. For now, Ady plans to take a break while considering his work options.

Ady believed his disability should not hinder him from being the best in the things he could do. He also said he has accepted it, whether or not there comes a cure.

For Mayette, Ady’s graduation from college does not mean her own “graduation” from being a mom. “It just means another challenge, in a different setup,” she said.

TAGS: Education, News, Regions, University of the Philippines (UP)