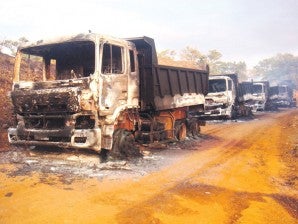 The attacks on three mining firms in Surigao del Norte, the largest staged by the New People’s Army (NPA) so far under the Aquino administration, will hamper peace negotiations with the communist rebels, officials said Tuesday.

Teresita Deles, presidential adviser on the peace process, said the attacks underscored the difficulty of negotiating with the rebels without a ceasefire.

The NPA is the armed wing of the Communist Party of the Philippines (CPP) that has been waging a Maoist insurgency since the late 1960s.

“Hostile attacks such as the one conducted by the NPA (Monday) in three mining areas in Surigao del Norte undermine the people’s confidence in the peace process, creating a ‘disconnect’ between agreements made on the peace table and what is happening on the ground,” Deles said in a statement.

The mine is owned by Nickel Asia Corp., the Philippines’ largest nickel ore producer. An affiliate, Taganito HPAL Nickel Corp., and the nearby Platinum Metals Group were also attacked, in what the NPA claimed was payback for years of alleged environmental damage and abuse by the firms.

Deles said that without the support of the people “peace negotiations become more difficult and a peace settlement more elusive.”

The government has said it hopes to sign a peace deal with the communists by the middle of next year, but few observers believe an agreement is possible.

Peace talks broke down this year amid familiar demands by the government for the NPA to stop its extortion activities and calls by the communists to free jailed comrades.

However, talks are expected to resume in Norway late this month and Deles said the government remained committed to the peace process despite Monday’s assaults.

Presidential spokesperson Edwin Lacierda said the attacks would “undermine the peace process” and make “it difficult to pursue negotiations.”

He said the government peace panel would “strongly raise” the attacks to the other panel.

But Lacierda made it clear that the government remained committed to pursuing peace with the NPA.

“Peace is a better alternative to war. That’s why we are committed to the peace process. We will continue our efforts to pursue the peace negotiations because that is what we believe is the better option,” he said.

Lacierda said the government expected the communist rebels to come to the table in good faith and to show that they are sincere toward pursuing peace and to stop all the needless violence.

Lacierda also called on rebel leaders to “call on their troops to exercise restraint as part of their confidence building measures toward the peace process.”

In a prepared statement, Lacierda expressed hope the NPA was as determined as the government to fulfill the people’s aspirations for peace.

He also said the government could pursue the rebels “whenever they commit an offense” because of the absence of a ceasefire agreement.

“No one should doubt our commitment to the safety of investors and our fellow citizens, who deserve to be able to pursue their livelihood without threat of extortion and violence to disturb them,” Lacierda said.

President Benigno Aquino III had learned of the attack at around noon on Monday and immediately convened a meeting of his security officials.

For the rest of the day, the President monitored the situation and issued instructions in between meetings, according to Lacierda, reading from a prepared statement.

At a Palace briefing, Lacierda said that he did not think the incident which he insisted was an “isolated” one, would affect investments in the mining industry.

He said President Aquino ordered a review of operational procedures because “he wanted to know how it happened, why it happened.”

As for the nationwide threat assessment report that Mr. Aquino had asked the police and military to conduct, Lacierda said the President wanted this to identify vulnerable targets of the NPA.

Lacierda assured the government would provide security in vulnerable areas.

With orders that he wanted “results,” Oban sent additional troops to Surigao del Norte to pursue the large group of NPA rebels.

He also activated the Joint Task Force Taganito between the military and the police to coordinate their efforts.

Gamba said as of late afternoon yesterday, no engagement with the rebels had been reported.

Asked to explain how the government forces had failed to ward off the rebels, the PNP spokesperson, Chief Superintendent Agrimero Cruz Jr., said there was a “force vacuum” in the area following the relief of the 68th Infantry Battalion, whose troops had gone on a unit retraining.

“The area was left vacant… If the 68th IB had been there, the NPA would not have been able to move as they did,” Cruz said.

The National Democratic Front (NDF), the political arm of the CPP, said the attack would not be the last.

Jorge Madlos, NDF spokesperson in Mindanao, said other mining firms in Mindanao faced similar “punishment” if they continued to destroy the environment.

It was not about revolutionary tax “as it can be negotiated, but it was more on the environment and the companies’ treatment of its employees and the indigenous peoples who were reduced to being beggars,”  Madlos said.

Madlos said the three mining companies that the NPA attacked had failed to answer charges of environmental destruction and a host of other issues.

“Sometime in April and May we sent letters to them but they ignored it. When they answered, they asked us to visit their main offices in Manila,” he told the Inquirer by phone on Tuesday.

Madlos said the NPA had investigated and found out that the three companies had indeed damaged the environment and violated workers’ rights and committed other violations.

He said the NPA had given the mining companies ample time to explain. “The revolutionary movement handed them the penalties,” Madlos said.

Madlos said the NPA was not prohibiting mining “as this is an economic enterprise” but he insisted that it must be done in consonance with NDF policies. Reports from Dona Z. Pazzibugan and DJ Yap in Manila; Franklin Caliguid, Frinston Lim, Jeoffrey Maitem and Dennis Jay Santos, Inquirer Mindanao; and AFP