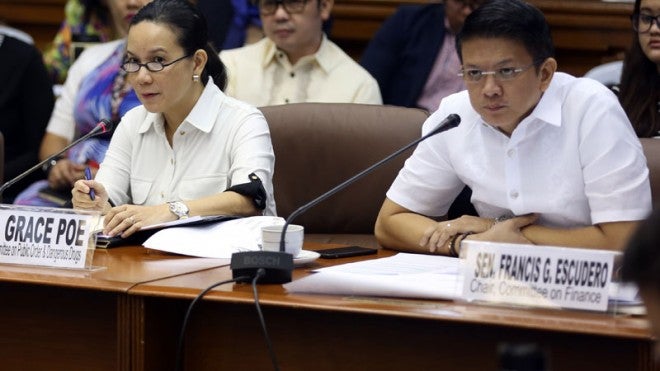 Senators Grace Poe and Francis Escudero will likely run for President and Vice President in May 2016, Sen. Sergio Osmeña III said on Tuesday.

“It looks that way,” unless President Aquino can convince Poe to be the running mate of Interior Secretary Mar Roxas, said Osmeña, who is expected to be the campaign manager of a Poe-Escudero tandem.

“The President is still there and it depends if he can exercise his magical powers,” said the senator who helped in the campaign of then Sen. Benigno Aquino III when the latter ran for President in 2010.

If Poe runs for President, a four-way fight would ensue with Roxas, Vice President Jejomar Binay and Davao City Mayor Rodrigo Duterte as her opponents, said Osmeña, whom Poe earlier said she was seeking advice from.

The President has met twice with Poe, who has become the front-runner in voters’ preference for the next President in recent surveys, dislodging Binay.

Roxas is in third place, behind Binay in the Social Weather Stations survey on June 5-8, and in fourth place, behind Duterte, in the Pulse Asia survey from May 30 to June 5.

On Monday, Speaker Feliciano Belmonte Jr. said Roxas must prove he could win in the 2016 presidential election or Aquino would have no choice but to endorse the “unstoppable” Poe. Belmonte is vice chair of the ruling Liberal Party (LP).

Based on the results of the meetings between the President and Poe, Osmeña said he knew about the plans of Aquino and the junior senator.

“The President wants Senator Grace out of the presidential picture and to run as Vice President for Secretary Mar because he feels the votes of Grace will go to Mar anyway,’” he said.

Poe still wants Aquino to endorse her as a presidential candidate even if she runs as an independent, according to Osmeña.

“She knows P-Noy has nowhere else to turn to,” Osmeña said of Poe, as he noted Roxas’ not-so-good standing in presidential surveys.

While LP members will not cross Aquino at this time, it will be a different story come election time as many of these members would leave the party to join the stronger presidential candidate, he said.

“That’s natural. You just look at the past elections,” Osmeña said. He noted that in the 2010 elections, many in the then administration party Lakas joined the LP.

Budget Secretary Florencio Abad said Aquino’s allies would support whomever the President anointed to be his successor.

“We will all go along with the President, including Secretary Roxas, if the President makes that choice,” Abad, an LP stalwart and campaign manager of Aquino in 2010, told the Inquirer on the phone.

Cabinet secretaries have their own presidential candidates as well, although they are not expected to declare their choices any time soon, Inquirer sources told the Inquirer.

The sources said it was a three-way split in the Cabinet—those rooting for Roxas, those who will silently support Poe and those who will remain loyal only to the President.

Sought for comment on this reported dynamics within the President’s official family, Abad said he believed that there was no “three-way split” in the Cabinet.

“The reality is we never really get a hundred percent from the coalition,” Abad said, referring to the reported preference of other LP members like Belmonte for Poe.

Abad said the “important thing” was for the LP to follow the process in choosing its standard-bearer for 2016, noting that the party’s national, steering and executive committees would have to meet to formally recommend the party’s choice as its presidential candidate.

However, it is still Aquino who plays the “key role in the decision-making process,” he added.

Believing that the 2016 presidential race would be fought among Poe, Roxas, Binay and Duterte, Osmeña said it would be “anybody’s ball game.”

He said that during the first presidential survey in September 2009—when the late President Corazon Aquino was just buried—Aquino was ahead at 51 percent against then Sen. Manny Villar Jr.’s 20 percent.

But after five and a half months or in January 2010, Villar was able to catch up with Aquino, as they were both then at a statistical tie of 35 percent each.

Osmeña observed that Binay, who is hounded by corruption allegations, was still not out of the game because the Vice President’s standing in surveys on voters’ preferred presidential candidate had not gone down below 30 percent.

At this time, Binay continues to enjoy support from a solid 30 percent. In the case of Duterte, he has not yet gone up 20 percent while Roxas, has not reached 15-percent support, Osmeña said.

Aquino wants Poe out of the presidential race, says Osmeña

No Poe, Escudero in 2016 LP ticket? No problem, says Palace