CBCP calls out for help for flood-hit Pampanga 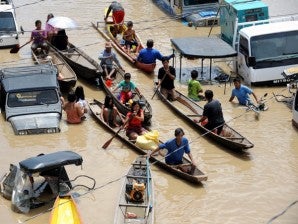 MANILA, Philippines—The Catholic Bishops’ Conference of the Philippines appealed on Tuesday to the government and other private sectors helping out with the relief efforts in typhoon-hit areas not to forget about Pampanga.

Initial assessment carried out by the CBCP National Secretariat for Social Action (CBCP-NASSA) showed that relief was more focused on the flooded areas in Bulacan while five towns along a river in Pampanga that remain submerged in floodwaters.

“We have a bigger problem in Pampanga,” said Fr. Edwin Gariguez, CBCP-NASSA executive secretary, at a forum hosted by the Catholic Media Network in Intramuros, Manila, on Tuesday.

Gariguez said the residents in the towns of Candaba, San Luis, San Simon, Apalit, Macabebe and Masantol refused to leave their homes, opting to accept relief goods on the second floor or roofs of their houses.

“Relief efforts in these towns are done through boats,” reported Gariguez. “While all eyes are on Bulacan, let’s also not forget about Pampanga, where we think the condition is worse,” the priest added.

He also called on President Aquino to visit typhoon-stricken areas.  “It is important to be with the victims at this time of despair because he is the symbol of government service,” said the CBCP-NASSA official.

Mr. Aquino’s critics earlier hit him for not being “hands-on” in the relief efforts following the two typhoons that destroyed houses and damaged billion pesos worth of agriculture and infrastructure.

Malacañang defended the President, saying that the latter did not want to divert the attention from the typhoon victims to him.

Gariguez said he could see the point that the President was trying to make but added that visiting typhoon victims would be a sincere act of showing government’s concern for the victims.

The Catholic Church’s social arm estimated that 250,000 to 300,000 families were affected in different ways by typhoons “Pedring” and “Quiel.” It said 30,000 families have been staying in cramped in evacuation centers.

“This number could still rise as the floods have not yet receded,” said Gariguez in his letter of appeal for help. “Their situation worsens day by day due to inadequate administrative assistance and prevailing bad weather,” he added.

Based on the list prepared by the CBCP’s partner, Catholic Relief Services, evacuated families are in need of emergency supplies such as sleeping mats, blankets, jerry cans, clothes, kitchen sets or cooking utilities and hygiene kits.

Some families were also in need of immediate shelter provision, such as tarpaulins, according to Gariguez.

The priest added that CBCP-NASSA was shelling out P1 millionas initial assistance to calamity victims. Help from New Zealand, Norway and other European countries is on the way, through Caritas Internationalis, according to Gariguez. “Caritas Asia has also pledged to help,” he noted.