Duterte on Parago burial: ‘He was no robber’ | Inquirer News
Close
menu
search

Duterte on Parago burial: ‘He was no robber’ 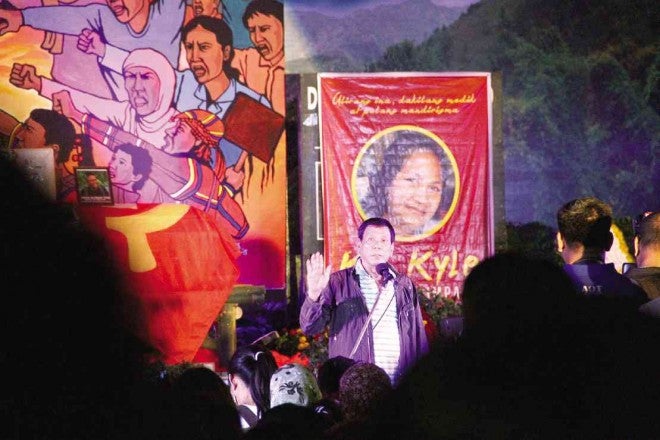 MAYOR Rodrigo Duterte speaks at the last day of the wake for slain New People’s Army leader Leoncio Pitao, alias Commander Parago, at the Almendras Gym in Davao City. He pledged he won’t wage war on the Communist Party of the Philippines and New Peoples Army and if, by chance, gets elected as President, the NPA would have one foot set in Malacanang. DENNIS JAY SANTOS/INQUIRER MINDANAO

DAVAO CITY—Mayor Rodrigo Duterte defended his decision to allow a hero’s burial for slain New People’s Army leader Leoncio Pitao here on Friday, saying there was nothing wrong with it.

Criticisms against Duterte flooded social media with some posts accusing him of being a communist, too, for allowing NPA members and supporters to hold a funeral march for Pitao, known in the underground movement as Commander Parago, in the city.

Among the critics was Pastor Alcover, an anticommunist leader, who wrote on his Facebook page that Duterte should be condemned.

“Parago is dead. Death is permanent. But to me when the person is dead it is all even,” Duterte retorted.

The mayor said while Parago was a communist leader, he should be respected for his ideology.

“After all, that guy is not an ugly guy,” said Duterte of Parago. “He was not a robber. He did not sell drugs. He was there dreaming of a different setup for the Philippines. That is all his sin,” the feisty mayor said.

Duterte said there was nothing wrong in his talks with the NPA either because, as a mayor, one of his jobs is to ensure the city is peaceful and free from communist-led violence.

“I cannot seal my door. I need a window to talk to the CPP-NPA,” he said.

Still on allowing the funeral march for the slain NPA leader, during which red-shirted NPA supporters and suspected members waved communist flags on the streets of the city, Duterte said he told security officials to allow it.

“We should not be contrasting on death. I’m your mayor. It’s not my job to do the fighting,” he said.

Duterte also openly admitted that he was not against the NPA and its quest for social equality.

But he immediately added that he did not subscribe to an armed struggle.

“What is not with me is the armed struggle,” he added.

Duterte then went on to say that much of the problem that brought the NPA’s armed struggle was rooted in dire poverty and that many people had been marginalized.

“The NPA is pursuing a kind of democracy based on socialism,” he said.

“(But) I don’t believe in killing fellow Filipinos,” he said, adding that he preferred negotiations or elections to bring about social change.

Asked anew if he would seek the presidency to bring about the social change he had in mind, Duterte said: “That would be the joy of the NPA.”

“They would be able to set foot on Malacañang. One foot of the NPA would be in Malacañang,” he said.

“But I am not a candidate. I am just a mayor,” he said. Dennis Jay Santos, Inquirer Mindanao