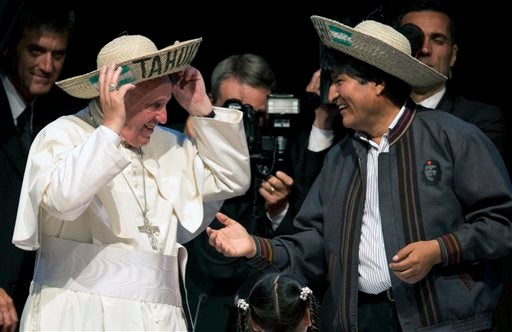 Pope Francis and Bolivia’s President Evo Morales, smile as they don the traditional Bolivian hats they were given at the second World Meeting of Popular Movements in Santa Cruz, Bolivia, Thursday, July 9, 2015. Francis gave a late-afternoon speech to delegates at the gathering. AP

SANTA CRUZ, Bolivia — President Evo Morales says he feels like he’s got a good friend and ally in the highest of places in his battle for revolutionary social change and halting global warming: Pope Francis.

“I feel like the pope is the first and best politician in the world,” Bolivia’s president said in an interview with The Associated Press a few hours before bidding Latin America’s first pope goodbye.

Francis made history on his two-day visit by apologizing before Bolivia’s first indigenous president for the Catholic Church’s “grave sins” in the subjugation of the Americas’ native peoples in the name of God during the European conquests that began in the 15th and 16th centuries.

He also condemned, before a crowd of leftist activists invited by Morales’ government for a World Summit of Social Movements, the “injustices” of a capitalist system that puts profits ahead of people and denies people basic rights of “land, lodging and labor.”

Asked if the pope is a socialist, Morales said his emphasis on creating a world in which no one is excluded amounts to socialism.

“I don’t know whether it’s communism, but it is socialism. He’s talking about community, about living in harmony.”

Francis has said several times that concern for the poor and marginalized is at the center of the Gospel, but has denied he’s preaching communism or any other political ideology. He’s called Marxism wrong.

Gregory Weeks, a Latin America specialist at the University of North Carolina at Charlotte, said Francis is asking people to recognize harms that have come from capitalism, not seeking its eradication.

“We shouldn’t confuse criticism of capitalism automatically with socialism,” Weeks said. “He’s not advocating for the government to take over everything.”

State-run and allied Bolivian media have highlighted the similarities in the messages of Francis and Morales.

“I feel like now I have a pope. I didn’t feel that before,” said Morales, complaining that the church had not backed him before.

On Friday, as he awaited the departure of the pope’s plane on the Santa Cruz airport tarmac, Morales chatted amiably with bishops with whom he has been at odds in the past.

One Morales-Francis exchange did set Catholic social networks ablaze during the visit: Shortly after the pope arrived on Wednesday, Morales gave him a cross fashioned from a hammer and sickle, a classic communist symbol, patterned after one created by Luis Espinal, a leftist Jesuit priest slain in 1980.

Morales told the said the pope had no prior knowledge of the gift but “at no point got upset. I admire that.”

Morales also settled the question of whether the 78-year-old Francis, who only has one good lung, chewed coca leaves during the visit to cope with the altitude during his four-hour stop in La Paz.

The leaf is the raw material for cocaine and Morales has been trying to get it off the international list of controlled narcotics because it is also widely chewed in the Andes as a mild stimulant. The leaf is sacred in Andean culture and has been used for centuries in religious rituals.

“The (13,100-foot) altitude didn’t hurt him. I gave him a chuspita (alpaca wallet) with coca leaves inside in case he got altitude sickness. He drank two cups of coca tea at the government palace,” said Morales, a former coca growers union leader.

“I asked him how he felt and he said he felt very good.” KS