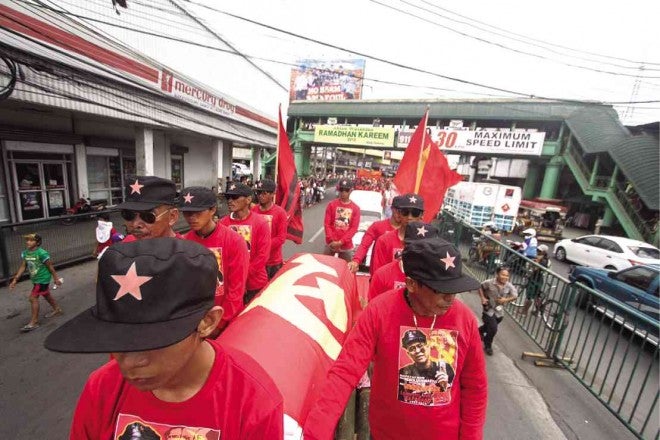 SUPPORTERS, some believed to be members of the New People’s Army, come out in the open in the streets of Davao City to bring the remains of slain guerrilla leader Leoncio Pitao to his resting place. At least 10,000 people attended the funeral march for Pitao, known in the guerrilla underground as Commander Parago. KARLOS MANLUPIG/INQUIRER MINDANAO

DAVAO CITY—The streets of this city were filled with shouts calling for continued armed revolution as supporters, relatives and friends of guerrilla leader Leoncio Pitao, alias Commander “Parago,” laid him to rest.

Flags of the Communist Party of the Philippines, NPA and National Democratic Front flew as the funeral march wound its way to the Davao Memorial Park where Pitao’s ashes were laid to rest.

Necrological rites were held for Pitao at the Almendras Gym where the slain guerrilla leader was given honors for dedicating 37 years of his life to the revolution.

Heeding his wish, supporters would place Pitao’s ashes beside his daughter’s, Rebelyn, who was raped and murdered allegedly by government forces. Rebelyn was 20 years old and a schoolteacher.

Pitao had been away from his family ever since he went underground to join the guerrillas. The only time his family saw him was in 1999 when he was briefly captured and spent several months in jail.

His wife, Evangeline, recalled the quality time that Pitao spent with his children when he was in jail. “The children loved it,” she said. “They were able to play horse on his back,” she added.

Silvestre Bello III, former justice secretary and peace negotiator with the communist underground, spoke during the necrological rites for Pitao and recalled meeting the slain guerrilla leader during martial law.

“The military boasts of a weakened guerrilla movement,” said Bello, now a party-list representative. “My answer to that: They don’t know the nation’s history. As long as poverty is there, as long as corruption is there, the revolution would continue,” Bello added.

Pitao, who was born on Dec. 7, 1958 in Balite, Agusan del Sur, had helped farmers who were displaced by loggers and forest guards reclaim their farms, according to comrades during the necrological rites.

After proving himself in battle, Pitao was sent to head the NPA’s main guerrilla unit in Davao and Agusan and credited with successful raids on military targets.

In 2010, Pitao was diagnosed to be suffering from diabetes but refused to take a leave from guerrilla work.

He was killed in a raid by Scout Rangers in Paquibato District on June 28.

According to Satur Ocampo, former Bayan Muna representative, the death of Parago does not end the guerrilla warfare that the NPA is waging in Mindanao and elsewhere.

The NPA, said Ocampo, may have lost many good leaders during its 40 years of waging an armed revolution, but the fight continued.

“There is an inexhaustible source of recruits among the people, including the peasantry, among the youth (in and out of school) indicating the validity of the objective of the revolution,” said Ocampo. Germelina Lacorte and Dennis Jay Santos, Inquirer Mindanao