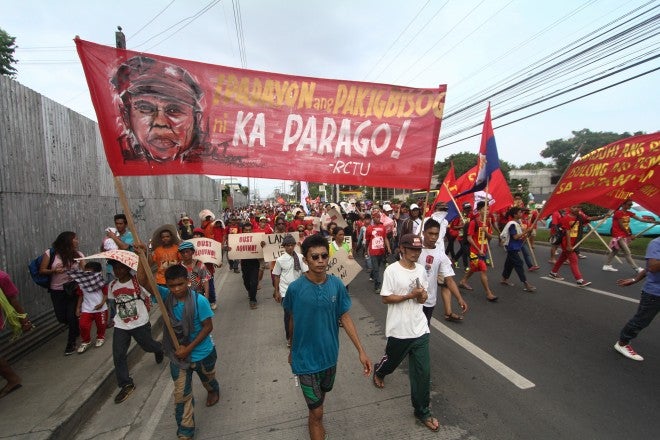 With guards standing in full attention, the body of slain New People’s Army commander Leoncio “Parago” Pitao, which was enclosed in a plain white coffin adorned by the red hammer and sickle flag, was paraded around Davao City accompanied by at least 10,000 supporters. PHOTO BY KARLOS MANLUPIG/INQUIRER MINDANAO

Red-shirted supporters – and perhaps some NPA members – aboard 10 dump trucks and 37 buses waved flags of various Pulang Bagani commands, and the flags of the Communist Party of the Philippines (CPP) and the National Democratic Front (NDF), as the caravan drove to Davao Memorial Park. The funeral march briefly stalled traffic as pedestrians and motorists paused.

Various groups and NPA supporters carried Pitao’s remains Friday morning from the Almendras Gym, where they held a memorial service Thursday night to honor the 37 years he had spent in the movement. They proceeded first to the Eastern Mindanao Command (Eastmincom) for a brief rally to condemn the military for killing a sick man, then went to Freedom Park where they marched to the Davao Memorial Park to have Pitao’s remains cremated.

Pitao’s ashes will soon be laid near his daughter Rebelyn’s tomb in accordance with his wish. Rebelyn was 20 years old and a school teacher when raped and murdered in 2009 by alleged state agents.

Except for the time after his capture in 1999, when he spent several months in jail, Parago has not had much time with his family because of his work, his wife, Evangeline recalls. “When he was in prison, the children loved it, they were able to play horse on his back,” Evangeline said.

1BAP Representative Silvestre Bello III, who spoke during the “Luksang Parangal” given to Pitao Thursday night, remembered meeting Pitao at the height of their struggle against Martial Law. “I came here to pay my respect to a warrior and a revolutionary,” he said.

Pitao, who was born on Dec. 7, 1958 in Balite, Agusan del Sur, had helped farmers who were kept off from the land by loggers and forest guards get back their land again, recounted his comrades during the memorial rites. After he proved his mettle in battle, he headed the NPA’s main regional guerilla unit of the Davao and Agusan area and credited for countless raids and agaw-armas (disarming) operations.

He was one of the military’s most hunted men, and failing to get him for years, alleged state forces abducted and killed his daughter Rebelyn.

Parago, who got his name from the name of the bird in an area where he used to work, continued his work with the masses even when diagnosed with diabetes in 2010. A few weeks before he was killed, Parago still refused his comrades’ suggestion that he take a break. He was killed in a raid by the Task Force Minion, led by the 6th Scout Ranger Company, in barangay Panialum, Paquibato district at 2:30 p.m. on June 28. He was 57.

“The resiliency of the CPP-NPA is owed to the fact that its political program, the very rationale of the revolution, continues to be heard, basically on changing economic and social conditions,” Satur Ocampo, former Bayan Muna representative, said.

Ocampo said the NPA might have lost many “good commanders” during the more than four decades of its being but the fight has continued.

He agreed that Parago’s death did not spell the end for the NPA.

“There is inexhaustible source of recruits among the people, including the peasantry, among the youth (in and out school) indicates that the validity of the objective of the revolution is recognized,” Ocampo said. Germelina Lacorte and Dennis Jay Santos, Inquirer Mindanao